Round Lake and Kidney Lake

Alright, this ride really came before the last post (below), but who's checking?  This one was an earlier ride with Paul down Doumont Road.  I had taken an earlier ride out this way by myself, hoping to find Round Lake and Kidney Lake.  Both looked to be quite easy to get to.  I got skunked on my first attempt and chickened out when the road appeared to be turning into a dry and very steep old river bed.  Rather than get myself into too deep a hole I turned around and went home.


I mentioned my problem to Paul who has visited this lake a few times and has walked out with some pretty tasty looking trout on occasion.  He offered to show me the way in.

I had been on the right track, but I had stopped short by a fair bit.  He took me over some very nasty looking "tank trap" mounds that appear at first to be impossible to get over.  Standing up on the footpegs makes all the difference in this:  the bike is under far better control when the centre of gravity is lifted higher.  I was pretty surprised how easily I went over some while standing.  (And equally unsurprised how my backside returned to the seat like a magnet if I allowed it).  We eventually made it to Round Lake in one piece.

Kidney Lake looks to be an easy to reach neighbour to Round Lake when viewed on Google Earth.  Having not followed the route carefully on a GPS or map, I'm not sure what side of Round Lake we arrived at.  I had expected Kidney Lake to be a quick and straight ride very little distance from here.  This wasn't the case. 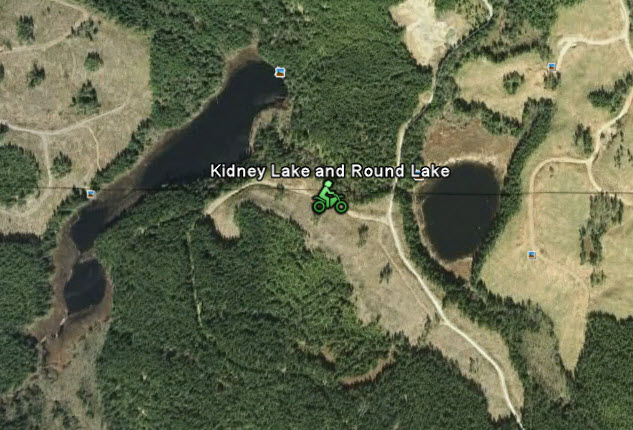 The ride to Kidney was quite difficult in spots and was reached by traveling up a fairly steep grade on fairly large chunks of sharp crushed rock.  Of course, rather than thinking of my own safety, I was more concerned about the state of my tires after being cut into by such sharp rocks.  We got there... and back... and it was worth it.