Paul and I took a street bike ride earlier this past summer to find a 1945 Canso wreck near Tofino B.C.  Such an interesting find needs to be shared on my blog!

A historical reference to the incident is shown below.  (It came from this Google community web page).

Canso 11007 left Coal Harbour about noon on 10 February 1945 and flew to Tofino.  The weather was quite blustery by the time the amphibian landed at Tofino.  Several crew members drove to Ucluelet to pick up some engine parts and then spent the early evening hours in the Tofino mess. They were finally cleared for takeoff at 2300 hours on runway 25 and had just cleared the end of the runway when the port engine quit cold. At this time the Canso was carrying 12 people, four 250 pound depth charges, normal emergency gear and about 750 gallons of fuel.Pilot Ronnie Scholes later said they were too low to turn and couldn’t gain altitude so he decided to land straight ahead.  He actually flew the Canso into a full-stall landing at impact point.  He personally felt the majority of the crew on board owed their lives to his sheer guts.  Mr. Knechtel was in the port blister, facing aft, when he realized the plane was in a stall attitude.  He looked out to his right and saw that the Canso was down between the trees.

The plane hit, the tail went up and up until he was looking at the stars past the tail – then it crashed down and all the lights in the Canso went out.  He could hear a crackling noise, looked out forward and saw, through a waterfall of gasoline from the ruptured left wing tank, the port engine on fire.  There was no sound from anyone – he thought they were all dead until he heard someone start swearing.  He yelled for a fire extinguisher and one of the engineers handed one out to him and he climbed up over the wing by kicking a foothold to get started.  When he got over the top, the nose was ripped completely away forward of the pilot’s seats – the seats were just sitting in the open.  The nose was laying off to the right on its side.  He can still recall seeing the florescent instruments and hearing the gyros humming.

Three of the crew were unhurt, one pilot had a fractured forehead and a broken nose and another crew member had a sprained ankle while the others had numerous scrapes, cuts and bruises – all fortunately minor.   The crew moved downhill about 150 feet, set up a parachute for a tent and the three uninjured made trips back to the Canso for the emergency gear (sleeping bags, emergency rations etc.)  They bedded down the more seriously injured in the tent and established a watch, trying the 'Gibson Girl' without an aerial as the pilot wouldn’t let any of the fellows climb a tree in the dark.  At about 0300 hours, they could hear shouting from the Tofino airport and then an aircraft being cranked up.  A few minutes later the crew could see the plane’s port running light, so one of the men fired a red flare with a Very pistol but the aircraft flew straight ahead.About the time the men stopped cussing him for his blindness, the plane came around the hill from the other side, circling left and dropped a parachute flare.  It scared the hell out of the men since they didn’t know whether the flare would drop on them or the Canso, with its load of spilled gasoline and bombs. Fortunately, the flare missed everything.  The next morning the rescue aircraft took off again and flew in a straight line from the airport to the crash site, homing the ground party in on the downed plane.  The rescue party packed out the injured while the less injured walked and they all ended up in the base hospital for treatment and observation. The Canso was left where it crashed."


Here's the route from Nanaimo: 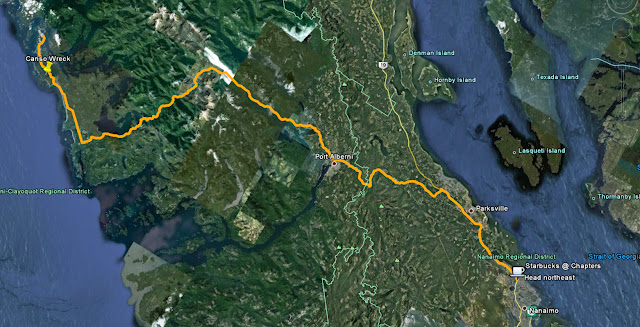 And here are some shots of the wreckage:

Some photos from the beautiful town of Tofino, (taken from the pub window):

[Edit: Aug 24th, 2014]
I see a great deal of traffic on here from people who have entered this blog from an Internet search.  I guess many are looking for a track to the plane wreck itself!  I had no GPS with me on the day of this trip, and I've discovered since that the only track currently available is on the site trailpeak.com.  What a useless site!  They want you to acquire upload points before they will even share their tracks, which you have to earn with uploads or BUY from them direct!  I attempted uploading a few bogus tracks; things like a quick Google Earth hand-plotted trip around the entire outskirts of the UK and the track around the lip of a small crater in Central Africa.  :)  Then I discovered that they actually intend to check the tracks before giving you your upload points!  I knew I had been beaten and would have to change to another plan:  I took a screen snag of their map of the trail and overlayed that picture as accurately as possible in Google Earth and then I traced over their track to make my own.  So, be warned, it's slightly off, but not by much.  I also can't guarantee the accuracy of the track from the original uploader.  If you use this track, I would really like some feedback about whether or not you found the plane!  HERE'S MY TRACK.  ;)

Also, if you manage to get your hands on the original track from trailpeak, (after you've sent them some SENSIBLE files), I'd like to post it here for people to download easily.  Please mail it to me at the email address on the welcome panel at the top right of this page.  Thanks, Andy.
Posted by Unknown at 7:43 pm