Marshall Lake is Tamed, but Moriarty Lake Remains as My Nemesis

Man, what an outstanding ride today!  Paul came up with a plan to attack Moriarty Lake a short time ago and we took a ride out there today.  It didn't go exactly as planned, but it turned into a spectacular ride all the same.  Here's the route:


We started out at the Doumont Trail and rode together to the Boomerang Lake turnoff, ("Int B") .  Paul turned right and I turned left so we could compare travel times arriving at 155 Main, the main Englishman River route.  My route was much slower and it appears that the older route is the one to take if time's an issue.  I think I still prefer the scenic route though.

We met back up and headed SW along 155 main, continuing until taking a left turn onto 155N, the road to Moriarty Lake.  We followed a route that both Paul and I had plotted separately on Google Earth.  The route looked like it could quite possibly take us to the lake shore, and so it was definitely the preferred route.  We got stopped however:  A relatively steep section with some problematic rocks proved to be too difficult to climb.  (Marked on the map and graph above with small, red triangles).  We gave it our best shot, but I'm afraid it will have to wait until another attempt. 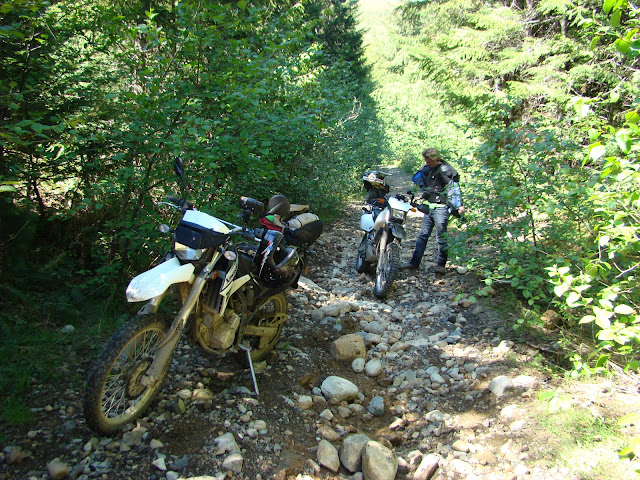 We turned back and tried the left turn, an earlier alternative at the previous Y intersection.  My GPS showed that this route ended abruptly before the lake, but it was worth a try at least.  The road quality was really good on this trail and the 400m gain in elevation from the Y to our next stopping point was easy, BUT we hit snow.


The ride up to this unfortunate blob of snow had been excellent and we both intend on returning to get to the end of the road.  Who knows, the hike into the lake might not be that bad.  The views along the way were truly outstanding.  We caught many excellent views of Mt. Moriarty:

So, we made our way back down this excellent road.  Paul had been in this area a short time ago and had found another really good route leading to Marshall Lake.  I've been interested in trying it since he blogged about it.  We decided to follow his previous route, entering the area on one road and returning on a different one.

This proved to be another great ride.  A gradual climb brought us to the familiar rotten and closed bridge seen on Paul's blog:

Next came a steeper section of road with some good sized rocks.  It was quite manageable although I wouldn't complain if the logging companies rushed out there and graded the road surface!  It was surprisingly easy to come down; a lesser slope than the more difficult road descending to Rhododendron Lake along the power line trail.

We arrived soon at Marshall Lake.  It's a beautiful lake surrounded by mountains.  The water has a clear glacial look to it and the two waterfalls off to the right add a fantastic sound and view to the whole scene.


We stopped here for a half hour or so and then followed the road a short distance to a spot overlooking the lake:

Now we began our return trip on a different road, eliminating the bridge, but shortly before making our left turn we encountered a large black bear on the road.  He began to run off as Paul's bike approached him, but stopped briefly to inspect us from a distance.  He was one big and healthy looking bear... big shiny black coat.  Fantastic looking animal!  After looking into the forest briefly from our bikes and seeing nothing, we continued on our way.  This was another really good road and I'm glad that Paul decided to show me this alternative route leading to the lake.

That was it...  We continued along 155 Englishman River Main to Branch 142 and returned back into Doumont through the Boomerang lake turnoff.  We sucked back a quick coffee at Starbucks, washed the bikes and went our separate ways.

What a fantastic ride!

Here's the route spelled out blow-by-blow:  (It's advisable to bring the video up full-screen and then tweak the resolution up to 720p if you want to read any of it).


Want more?  Here's one that's sure to bore you to death unless, a) you were there, b) you wish you were there or, c) 16 minutes of constant repetition excites you.  Re-vamped...  Now it will just waste 2 minutes and thirty-nine seconds of your valuable life.  It's a Google Earth "Flyover" of the same KML track.