It's a well known fact that if you buy a new motorbike it will rain for weeks.  Finally, we've had two rain free days lately and I was able to get the new Beta Xtrainer out for a blast on both days.  I met Ryan and Eric at the Wastelands track yesterday for a half day of log jumping and general blasting around, and today I went for a solo ride to find the Eagle's Nest Cabin off Bonnell Main logging road.  Big "thank you" to John N. for pointing this location out to me last month.

John had suggested that I try the route in from the top, (walking in from the N.E.), and so this is what I did.  Here's my route map:

1.  Entered at Harwood Drive.  What a hilarious mess they have made of the usual way in.  The place is looking like The Maginot Line with its newly dug deep trenches.  I thought I was completely hooped until I rode down to the yellow gate at the very end of Harwood to find the walk-in entrance has been widened enough to get a Gold Wing through.  I guess they're fighting trucks only these days.

2.  The road in has been graded heavily once again.  The hilly section has a wide variety of rock sizes from large boulders to scree.  Fun ride up, although a little creepy on my new bike which is still a little too high for my stunted Welsh/Scottish legs.

3.  Leaving the Lanzville trails, I took a right turn onto Bonnell Main.

4.  Keep left and leave Bonnell Main and stay left at the next intersection nearly 200m ahead.

5.  You can go either way here.  A right turn will lead up a rocky road which eventually reaches a Y intersection.  A small quad trail begins between the branches of the Y and this will take you up to the back of the cabin.  It's the standard way in, although as John had mentioned to me, the road is quite rocky and the quad trail is steep and rooty.  It's quite do-able, and is likely the better way in, even if you're faced with walking.  A left turn will take you to a dead-end spur road (6) where you begin a 600m uphill hike to the cabin.  (A waypoint for the cabin and this track is available at Wikiloc).

UPDATE (Paul): I dragged Andy back to the cabin on April 2nd via the quad route above (Small Quad Trail).  I rode up the small quad trail which was much easier than it looked.  What was interesting was after visiting the cabin, and starting to ride back down this route, we saw a truck coming up from the south...

UPDATED AGAIN (Paul).  Wednesday, Ap 6th: Tried the "Unknown Large Truck Route" that heads southeast.  I approached it from the South, about a km after Kidney Lake.  Initially it was easy, but soon got into some large river rock like boulders that you would find in a creek bed.  The reason became obvious shortly after that.  I turned a corner and the road became a serious hill climb with river rock and wet rock outcrops which make traction very hard to acquire.  I tried to surmount the hill 4 times, and each time got stopped at a wet rocky outcrop.  It will be doable when dry, but still a challenge.  Good fun though.You can see the route in purple on Andy's updated map below. 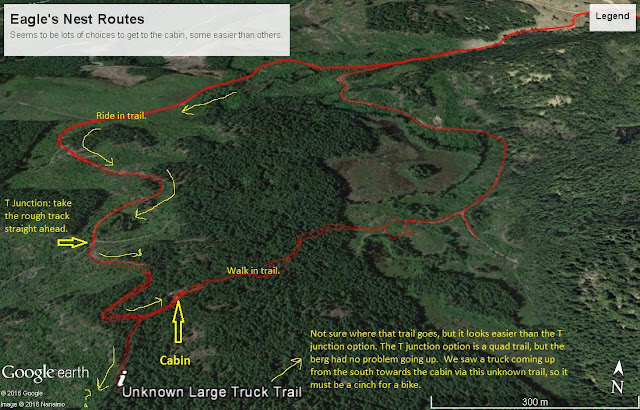 UPDATED AGAIN (Andy):  John N. very kindly sent me this track that spells out the route coming in from the SE side.  I believe this is the route he meant when he originally told me to approach from the top side.  The trail begins about 1.2 km north of Round Lake.  Another possible cabin appears on the screen capture below.  Good for an upcoming ride!  (found it-click me). 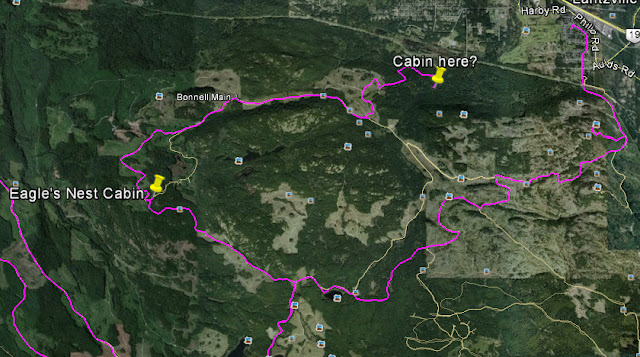 6.  Park the bike here and proceed S.W. on foot.  Not a great hike and not the preferred route!  Directly ahead of you are a couple of marsh areas which are easy to get around if you don't mind clambering over a couple of hundred metres of downed trees.

7.   From here there are a number of animal trails that make the going a little easier until they peter out and you're left with an uphill slog through more rough terrain.  As you continue upward, you'll see a rocky outcrop covered in moss--the cabin is perched on the flat top, (although it won't be visible yet).  Riding boots are a poor choice to attempt climbing this rock and more suitable walking/climbing boots would be worth the carry in.  You won't have much of a climb if you navigate carefully through the trees.

8.  After a final short climb up a heavily moss covered rock, you reach the front side of the Eagle's Nest cabin.  It's a small (perhaps 10' x 15') cabin with a framed plywood floor and upright log poles to support metal siding material.  It's nothing fancy, but it's well enough constructed to keep a few people warm for the night.  There's a small wood burning stove inside and water is supplied by a small rain-filled tank.  (Advisable to use water purifier pills since I doubt anyone gets up there to shock the tank with chlorine).  Bring in some ice if you want to use one of their ice coolers.  It looks like people really respect this place, at least the last visitors did.  It was clean, tidy and well organized.  A guest book is on the table.  There's an outhouse and a covered area for dry wood.  Four wooden lawn chairs surround the fire pit.  Some a-hole left beer cans scattered about the fire pit.  Please carry out your crap if you decide to use this open invitation cabin!

9.  Having never tried the other way in, I walked down the quad trail for a distance to see what it's like.  Quite doable in dry conditions, although rooty and fairly steep in some sections.  (Didn't walk it all).

10.  After hiking back down the way I had come in, I took a quick ride along the alternative route.  I stopped where the road began to steepen and get rocky.  Still do-able at this point, but I wasn't ready to start bouncing around too much with this being a solo ride.  I turned around since I'd seen the cabin already.  :)

11.  Rode back along Bonnell Main and passed the entrance back into the Lantzville foothills with a plan to exit the logging roads via the "tank traps."

12.  Holy road changes.  A new road punched in near the tank traps made this intersection completely unrecognizable.  I thought I might need a left turn because I was getting close to the traps, but took a right to see where it went.  The road became familiar very quickly and was clearly the route towards Boomerang Lake.  I turned back.

13.  Took the left turn (location 12) option and rode along a new logging road.  This is the road that is now visible from the tank traps when approaching from the Doumont side.  I continued along here until the road stopped and turned around to try what appeared to be an obvious route towards the tank traps area.

14.  It was just what I wanted and soon opened up into the trail we have been calling the "Tank Traps Alternative."  The trail joins, (as it did before), the familiar route up through a round-rock riverbed towards Weigles Rd. and Doumont/Biggs.

15.  That's all I have for today.  It was an excellent solo ride on my new Beta Cross Trainer!

Video of the ride down from the cabin using the quad track to the "T Junction".  (Make sure you turn the Res up  to 1080p and watch it on YouTube for better quality.) 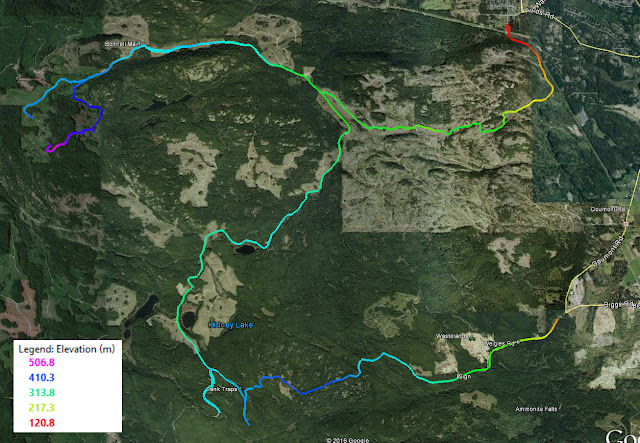 
Google Earth Flyover of the Route 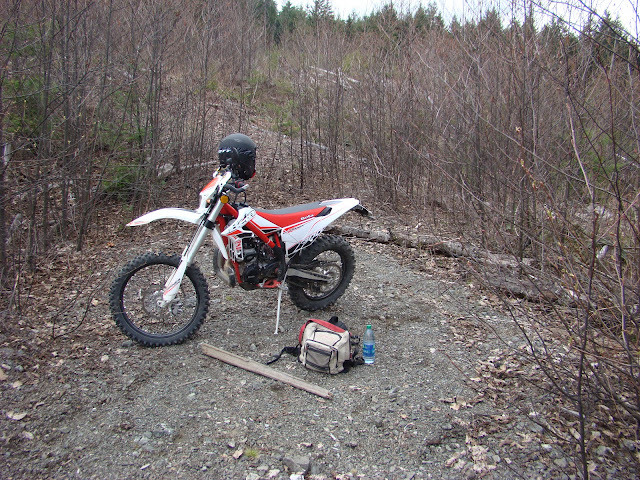 The End of the Road:  Hike Begins S.W. Towards the Cabin 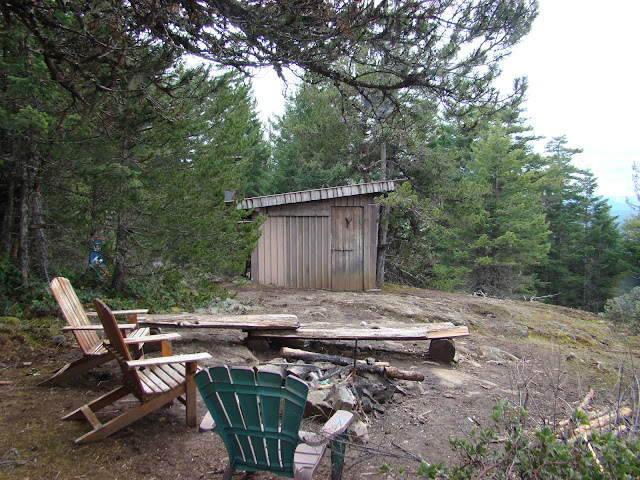 First View of the Cabin When Approaching from the top N.E. Side 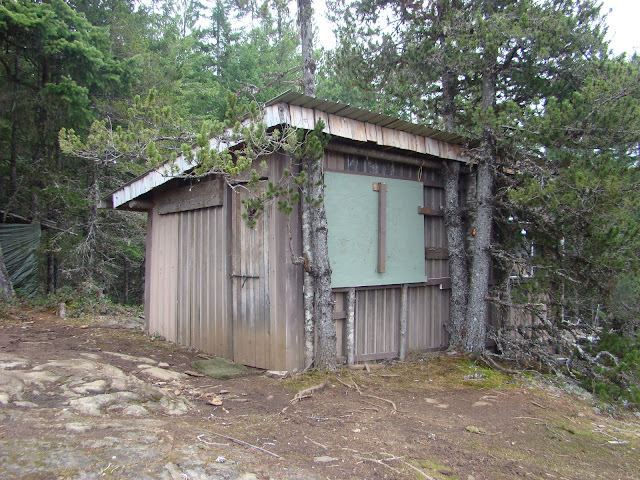 Front and Side of Cabin.  Two Windows on the Right Side

Panoramic View:  Fantastic View of  Nanoose Bay from Up Here! 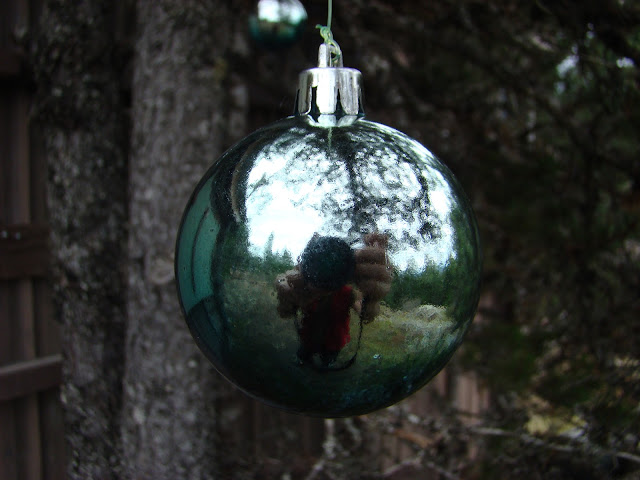 Christmas ALL YEAR at the Eagle's Nest Cabin 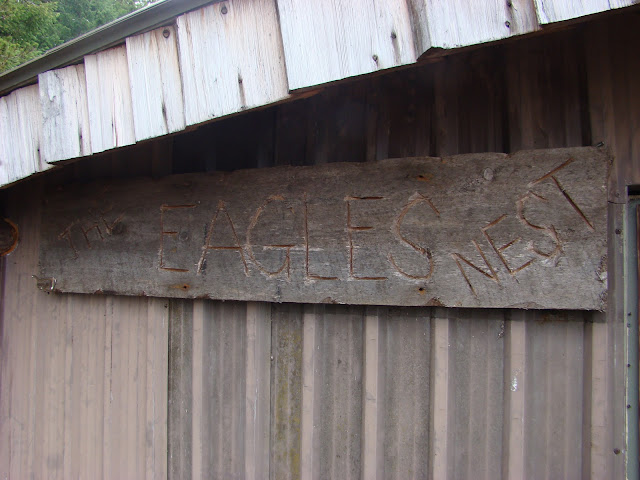 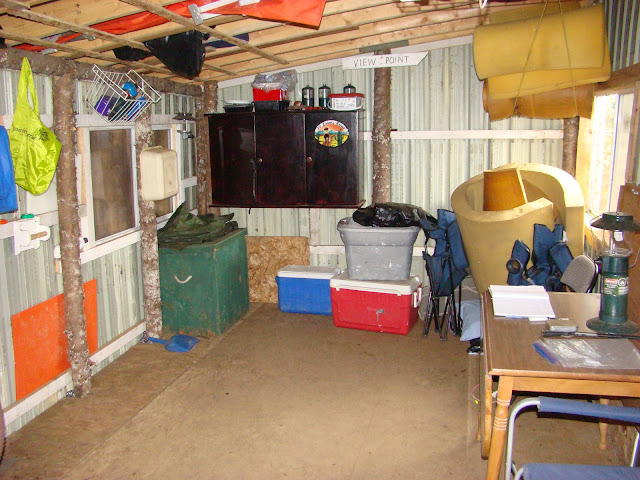 Looking in from the Front Door 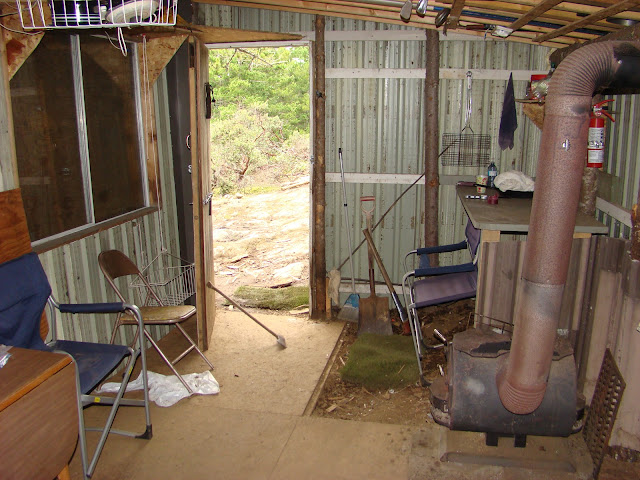 Looking Back Towards the Entrance 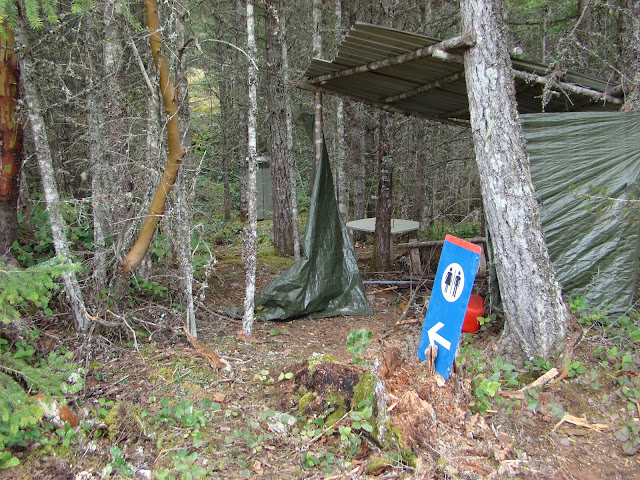 The Wood Pile and Outhouse 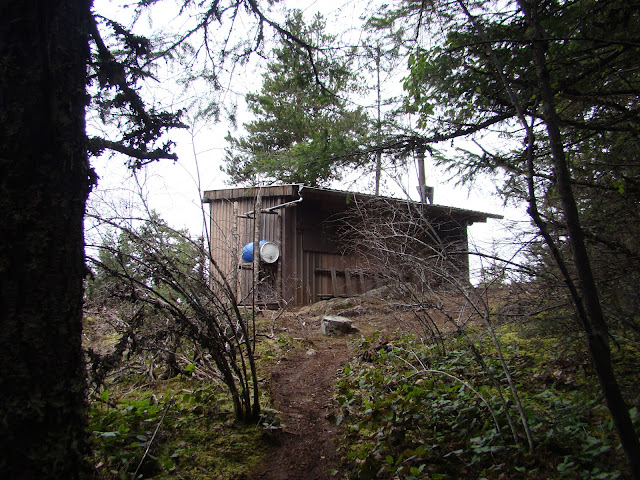 The Back of the Cabin from the Quad Trail Leading Down 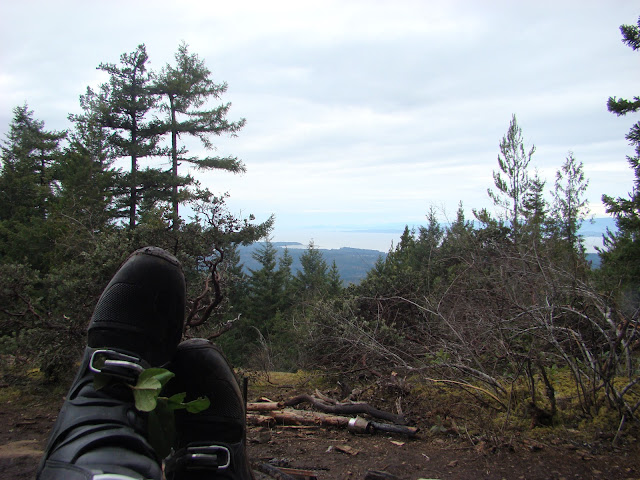 Enjoying the View of Nanoose Bay 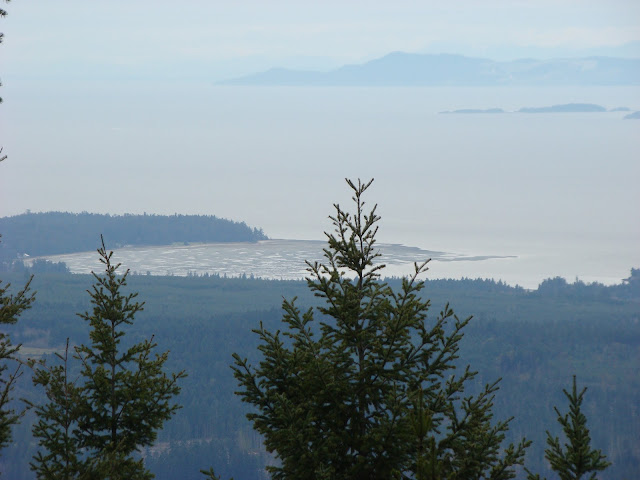 Zoomed In on the View 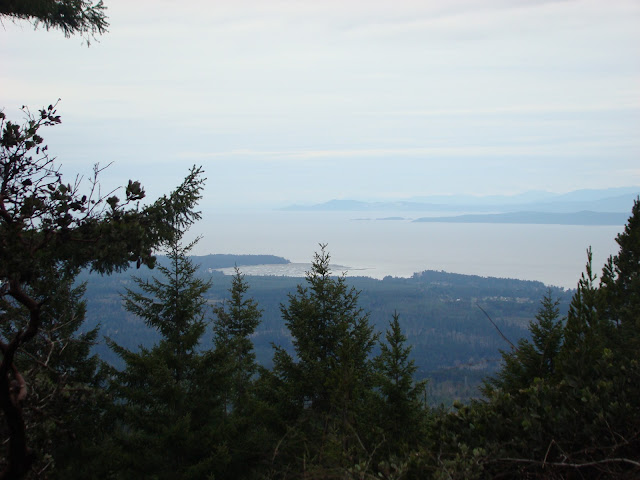 I Liked it so Much, I Took Another 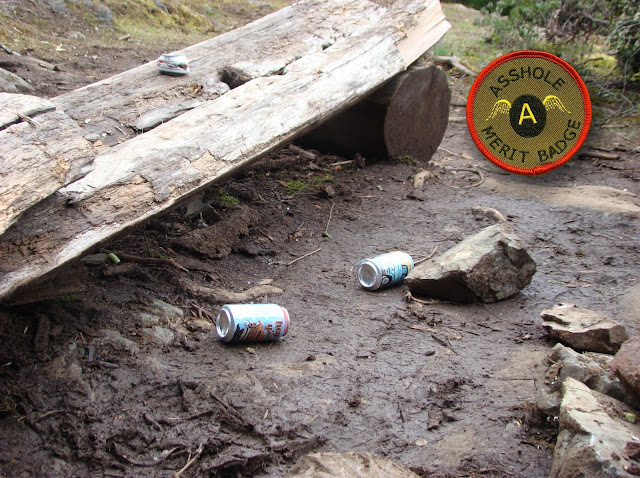 Please Pack Out Your Garbage 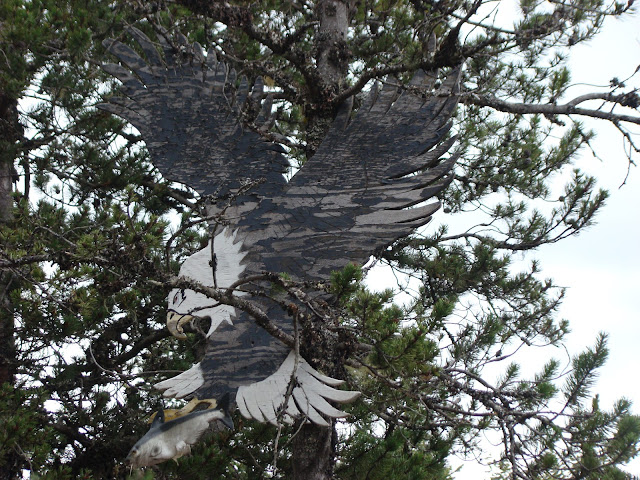 Thanks for the Visit, Eagle's Nest People