I got a chance to take my new Beta Xtrainer out today.  Second ride, but this time in the dirt.  All I can say is that I'm in love with this beautiful Italian scarlet harlot!  I knew there was going to be a marked difference between my trusty old KLX250S and this new flame, but never in a million years did I think the divide between the two would be so great. 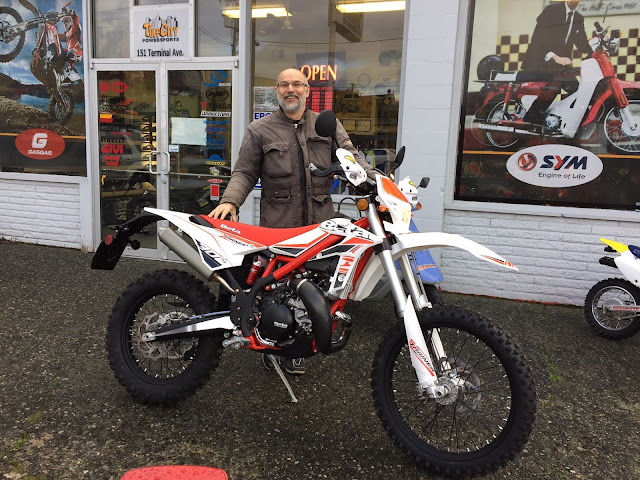 Coming from thirty years of riding four-stroke street bikes and a few years of riding the Kawi dual sport, the two-stroke is a massive departure for me.  Never had a smoker before!  The engine note is going to take some getting used to, especially when I wind her up, but the smooth power delivery took about five seconds to get used to.  I'm amazed at the low centre of gravity and lightness, especially when standing.  The oil injected 100:1 produces very little smoke off idle; actually I have it running at 50:1 right now with an added 100:1 premix in the tank on top of the injected oil.  Dealer wants me to do this for the first two tanks.  Smokes like a bastard on start up, but almost completely disappears when at op. temperature.

It was a quick ride today.  I took it up to the gravel pit at the end of Doumont Rd.  Did some slow turns and balancing practice and tried her on a few hills.  Much faster on the bumpy sections than the KLX!  Much easier and way nicer to ride standing up than the KLX.  I really like my old Kawi, but I'm afraid there's not much competition here.  She's definitely going out to pasture.  Might end up as my occasional commuter bike.  Would make a good super moto for in city riding.  Very good little dual sport if you're interested in buying one.  ;)

I had the dealer install a few optional extras:  Cycra hand guards, pipe guard and the road kit that comes with the bike.  Might take the plate holder off and remount the rear signal lights and plate to give me better rear end clearance.  I still need to install my GPS holding clamp/ball and power plug-in for trips into the bush.  (Beautiful heavily tapered bars on this bike that I really don't want to cover in clamps, but I'm not carrying my GPS around in my pocket).

I had a chance to try a quick ride on the KTM Freeride fairly recently and found it to be touchy on the throttle control.  I think any trails rider would see the advantage of this snappy acceleration for hopping the back wheel in an instant burst, but the smoother delivery of power from the Xtrainer seems to be more useful for the riding we do.  Love this bike!  Magically turns any crap dirt rider into a mediocre dirt rider.  Ah, mediocrity--I have arrived!  ;)  This year's riding season is off to a great start.

Get a load of Trevor Campbell, enduro and trials expert, putting the xtrainer through some motions.  This will be me in about six weeks. *phffffffbaahahaha*