1 Monashee Pass (3953ft): The #6 is amazing riding here.  According to Destination Highways, this is #2 in the province: DH2.  You will likely not see another vehicle for much of this road, but if it is a silver Mercedes GLK get his number.  The man's a nutter...more on that later.  This road winds up initially through very Vancouver Island-like scenery.  The road surface too, is similar, in that it is crap in places.  But that aside, it's easy to whisk along here keeping your eyes on the road surface and scouting for deer and moose too, but heed the yellow signs and add 20kmh to the limits and you'll be cruising. Unfortunately for us, but fortunately for any future bikers here, the best part of the road (the eastern slopes after the summit) are presently being resurfaced.  The ride down from the summit is a delicious blend of grade, curves, s-bends, bridges and views, with a soon to be fabulous surface, to boot.  Pity the Province can't find it in them to pave the Alberni to Tofino road on the island the same way (NDP Riding?).  Parts of this road are very similar. 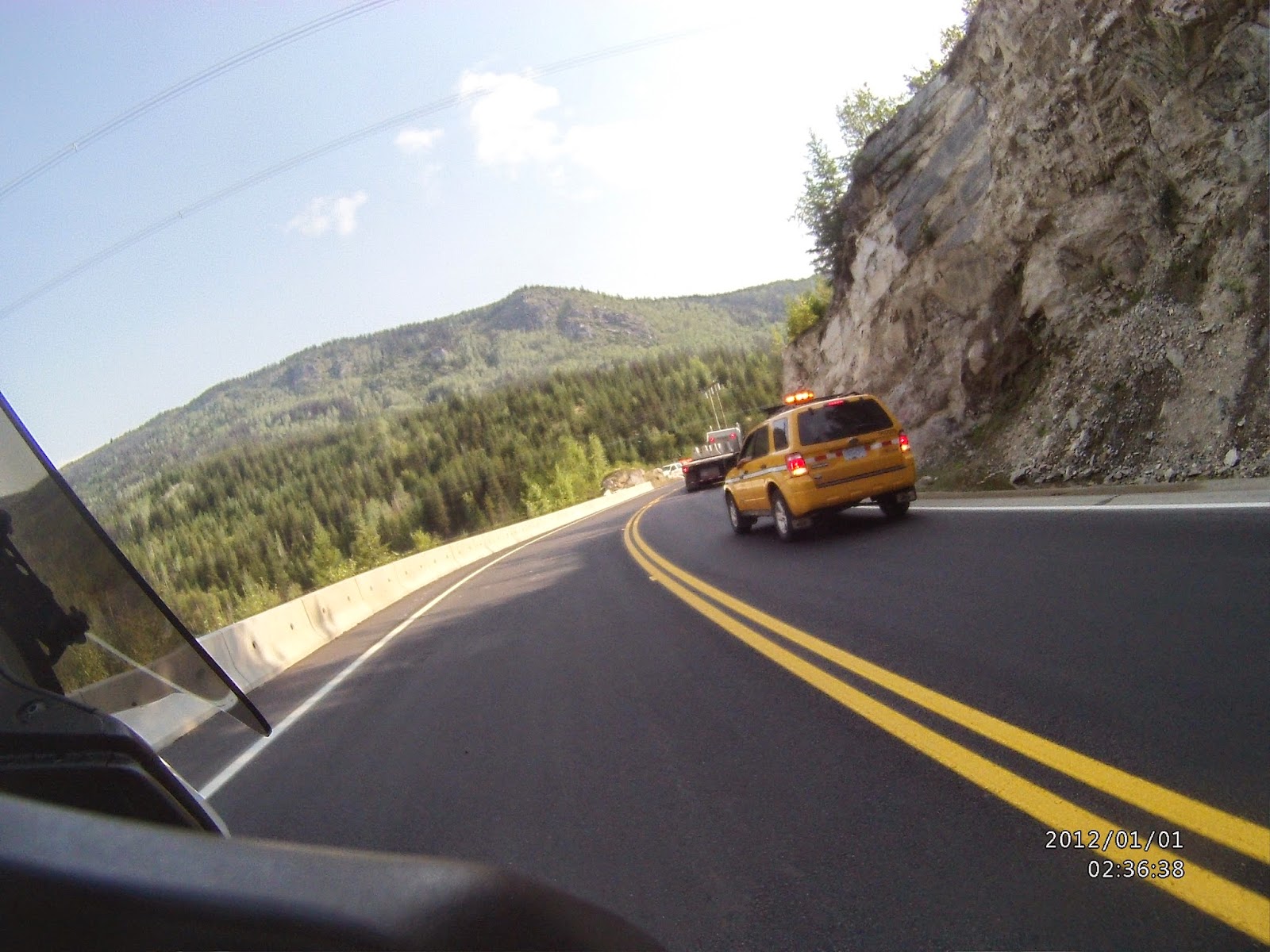 (Roadworks! With warning signs for miles before you actually hit them...what a travesty!)

2 and 3 - Needles Ferry to Fauquier (Cable Ferry):  Denman Islanders don't want a cable ferry, but from what I could see, Arrow Lake can pipe up, white caps etc, and the ferry was unbelievably smooth and fast.  Best of all though, it was free.  It must be a Liberal riding. Motorcycles, the many signs state, don't get preferential boarding on these ferries, hence the man in the Merc desperately trying to repeatedly cut me off and pass me on insane corners on the Monashee Pass road.  Eventually I acquiesced and he sped off at 150kmh or so.  We met him again, on the ferry  lineup - two cars ahead, chuckle...The half capacity "vogage" is 10 minutes or so, and the staff are friendly. The locals use these ferries like roads and expect it to be free and regular.  And they are- every half hour. Wow.  BC Ferries - anyone listening? 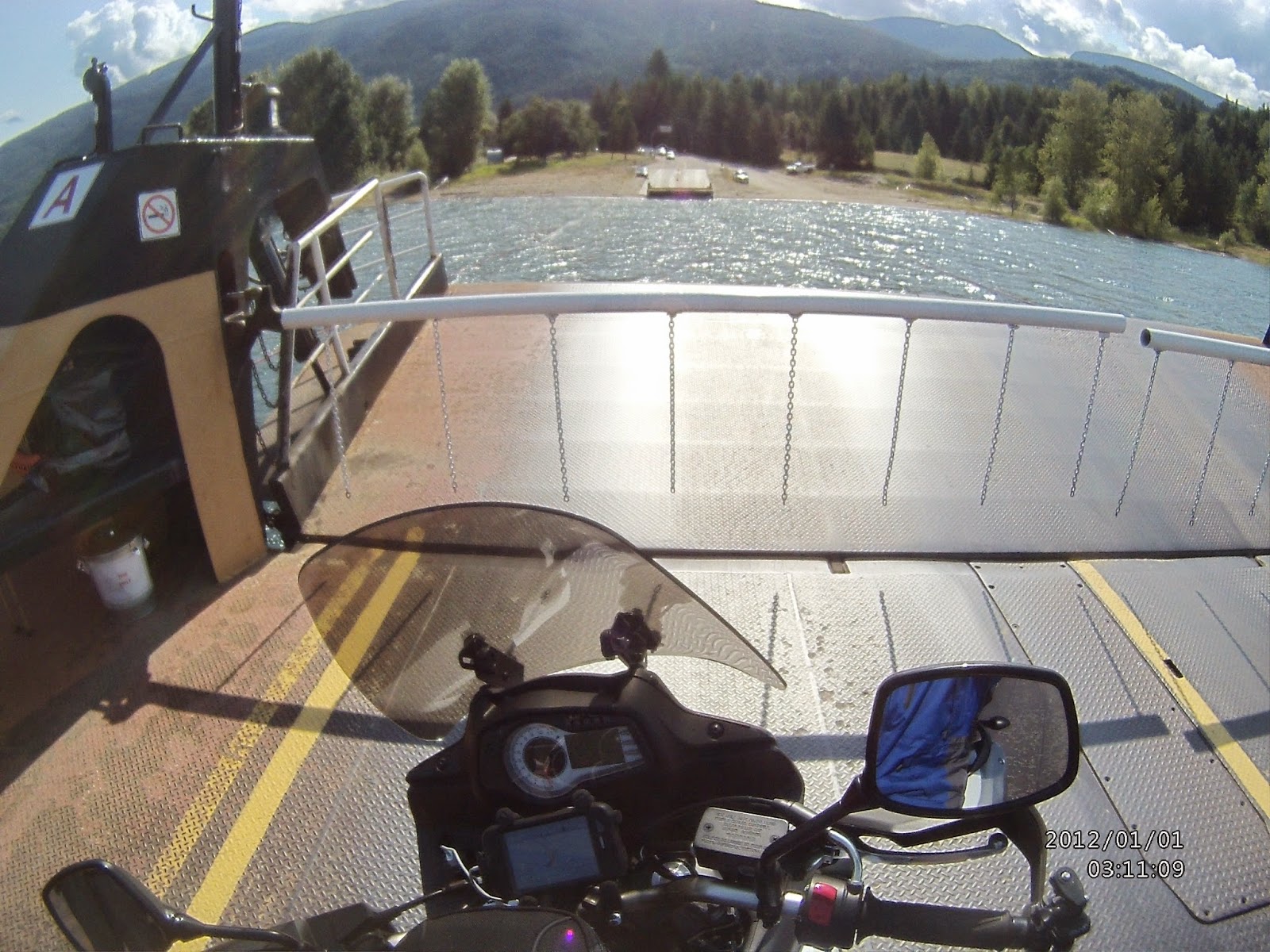 Above, approaching Fauquier - which coincidentally echo our feelings towards the Merc driver... 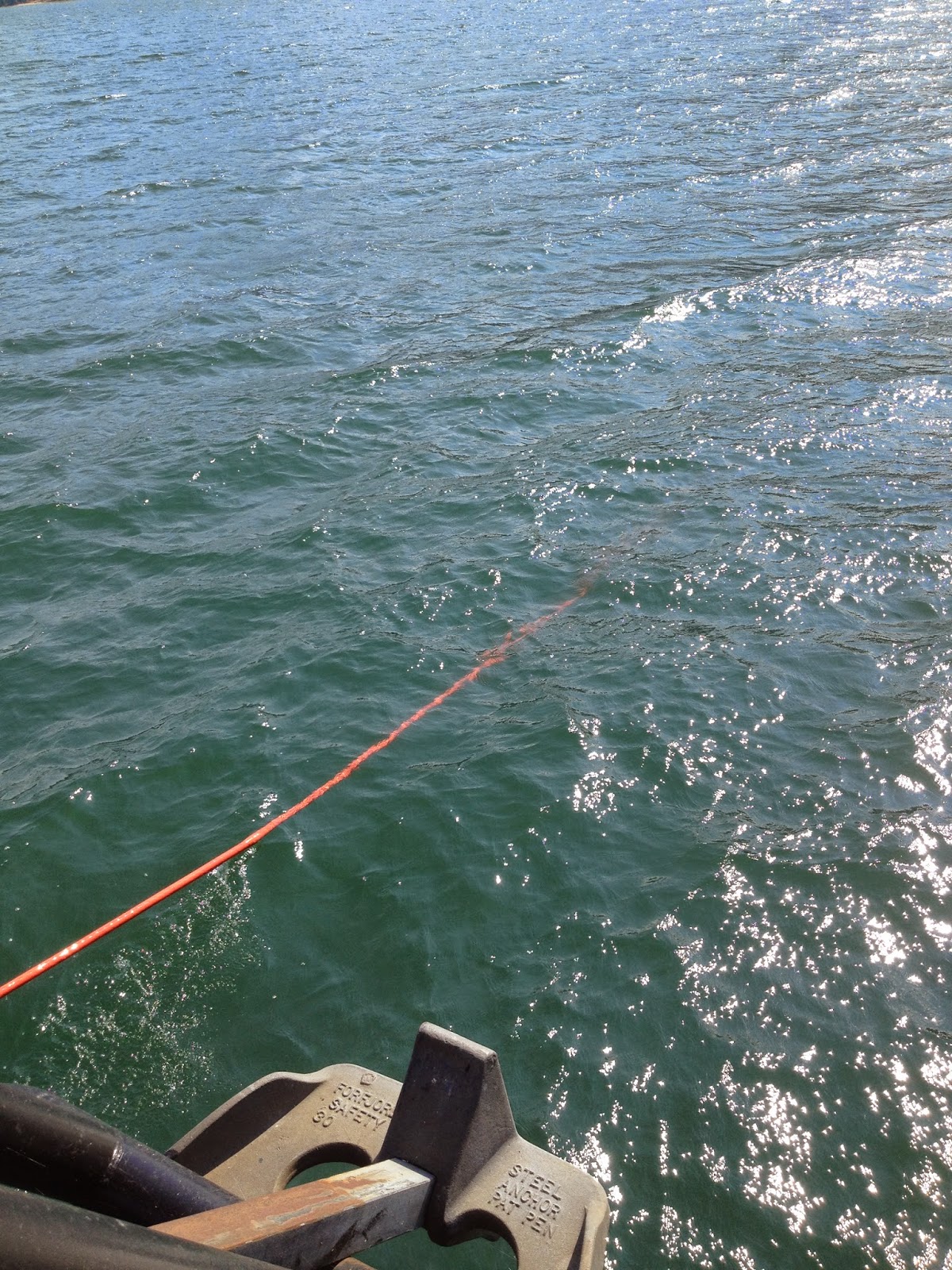 Above: One of the ferries two guide cables which is picked up from the lake bed and dropped back there afterwards. 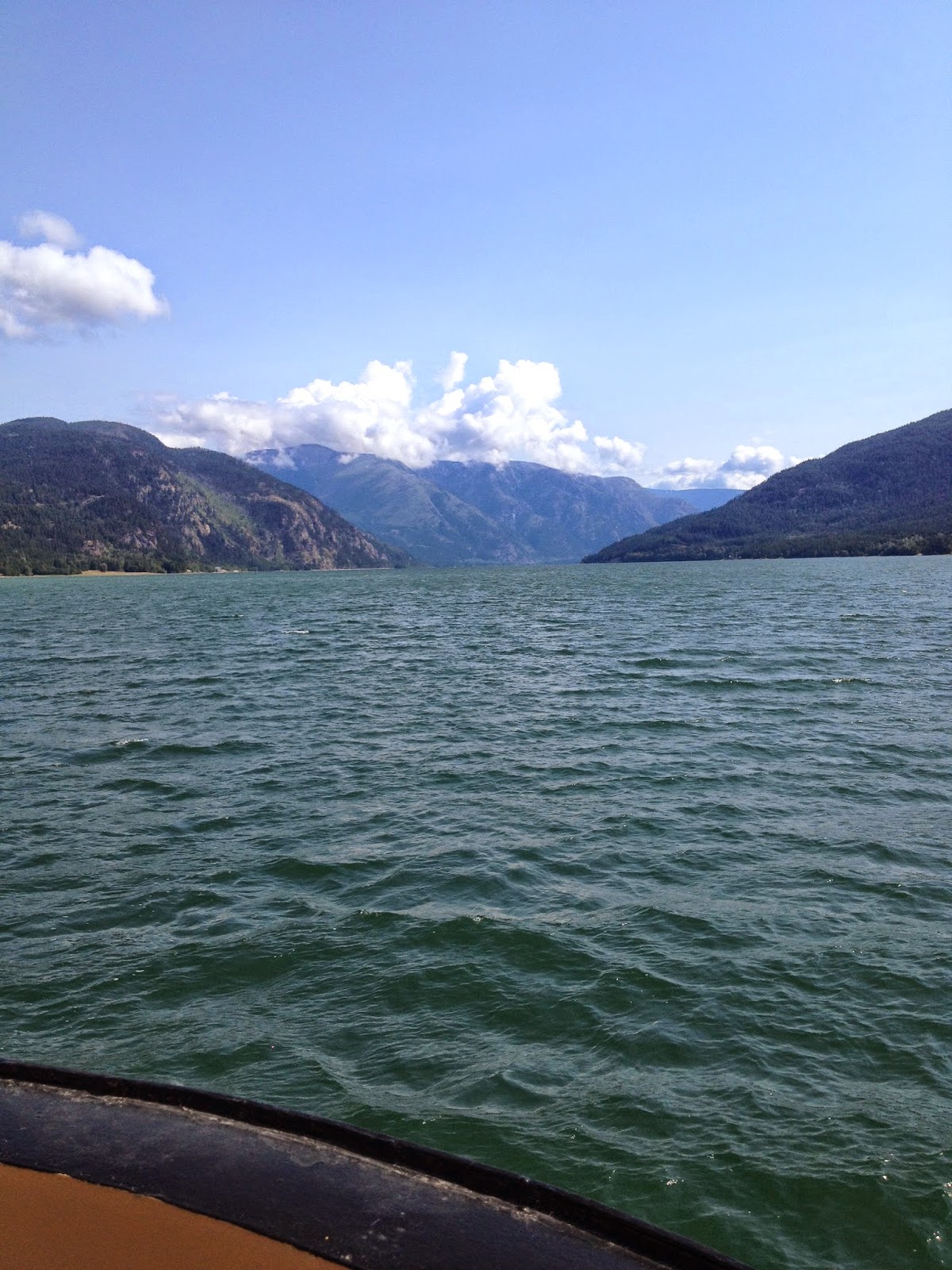 The lake is a similar size to Baynes Sound near Denman Island.

3 to 4 - Fauquier to Nakusp: Every tenth power pole seems to have a large Osprey nest perched on it.  This road runs on the east side of Arrow Lake and dishes up more gentle curves and elevation changes with the views.  Traffic is light and the surface is good. 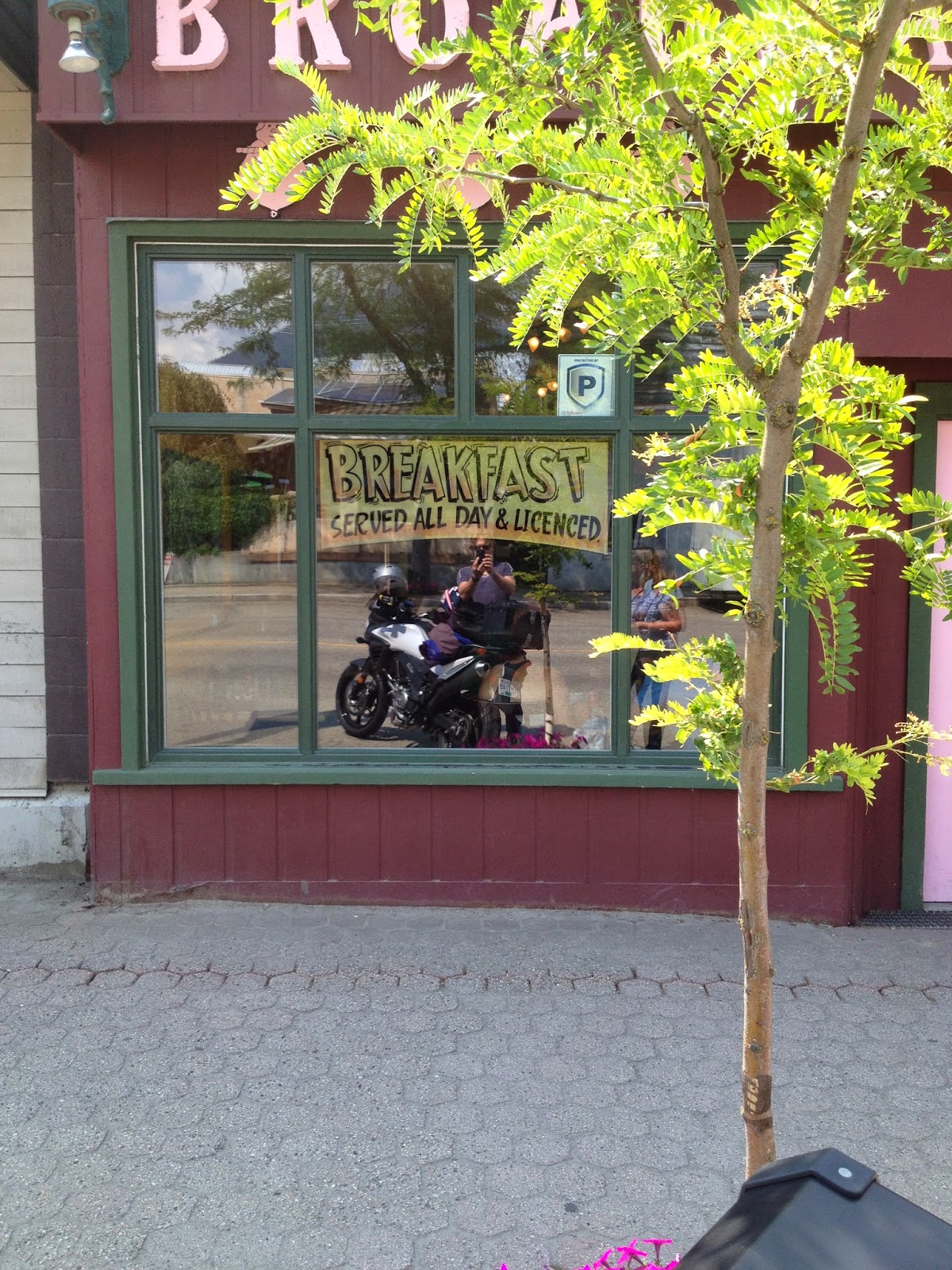 A short vid of part of the ride from Needles to Nakusp...I know it was double yellow lines -I'm not blind, but it was VW Bus for Christ's Sake! The video camera is very wide angle, so curves are straightened, hills are flattened etc.  Judge a corner by the lean...

5 New Denver: - This is the start of one of the best rides in BC, but before that, some food. 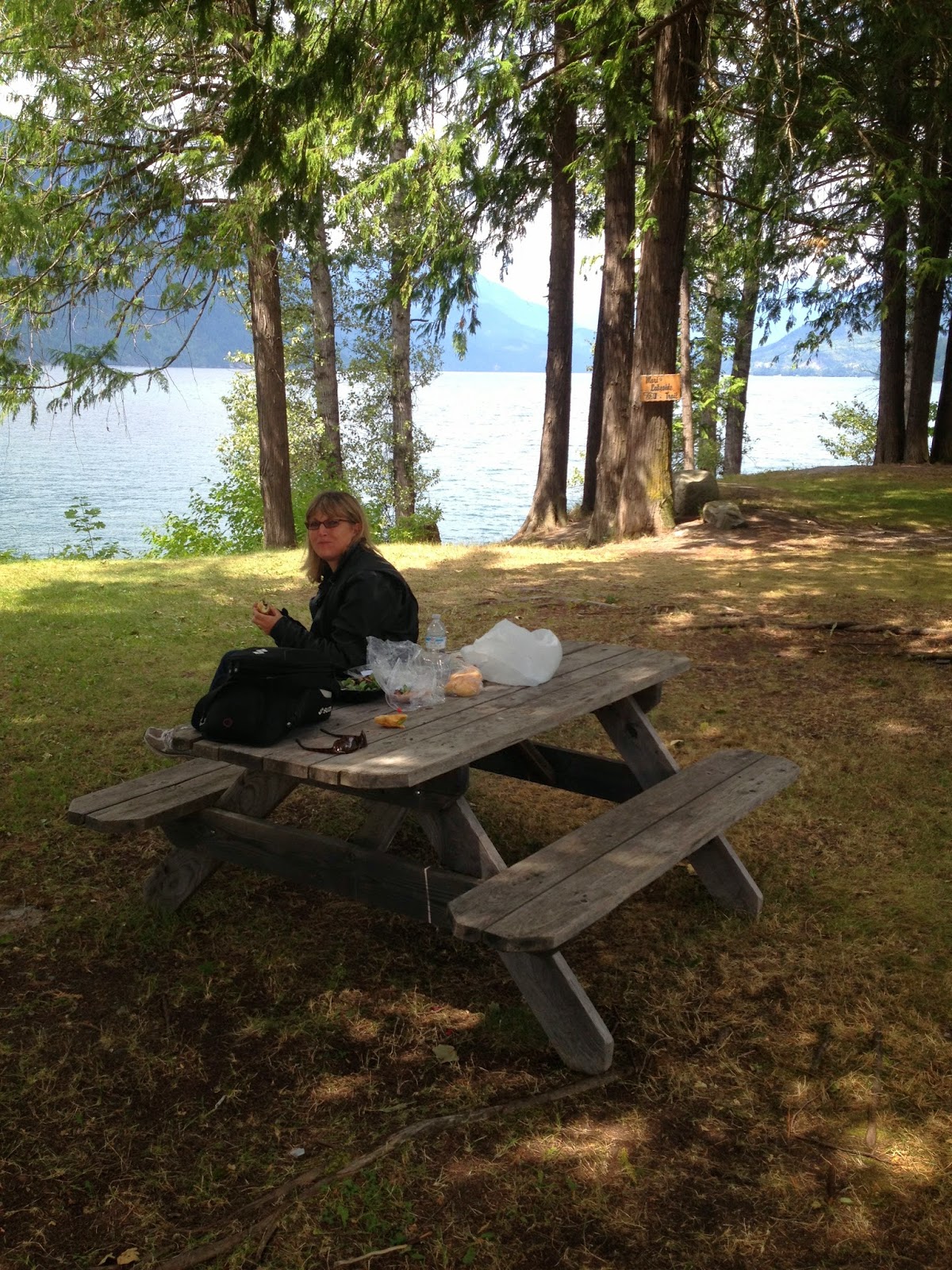 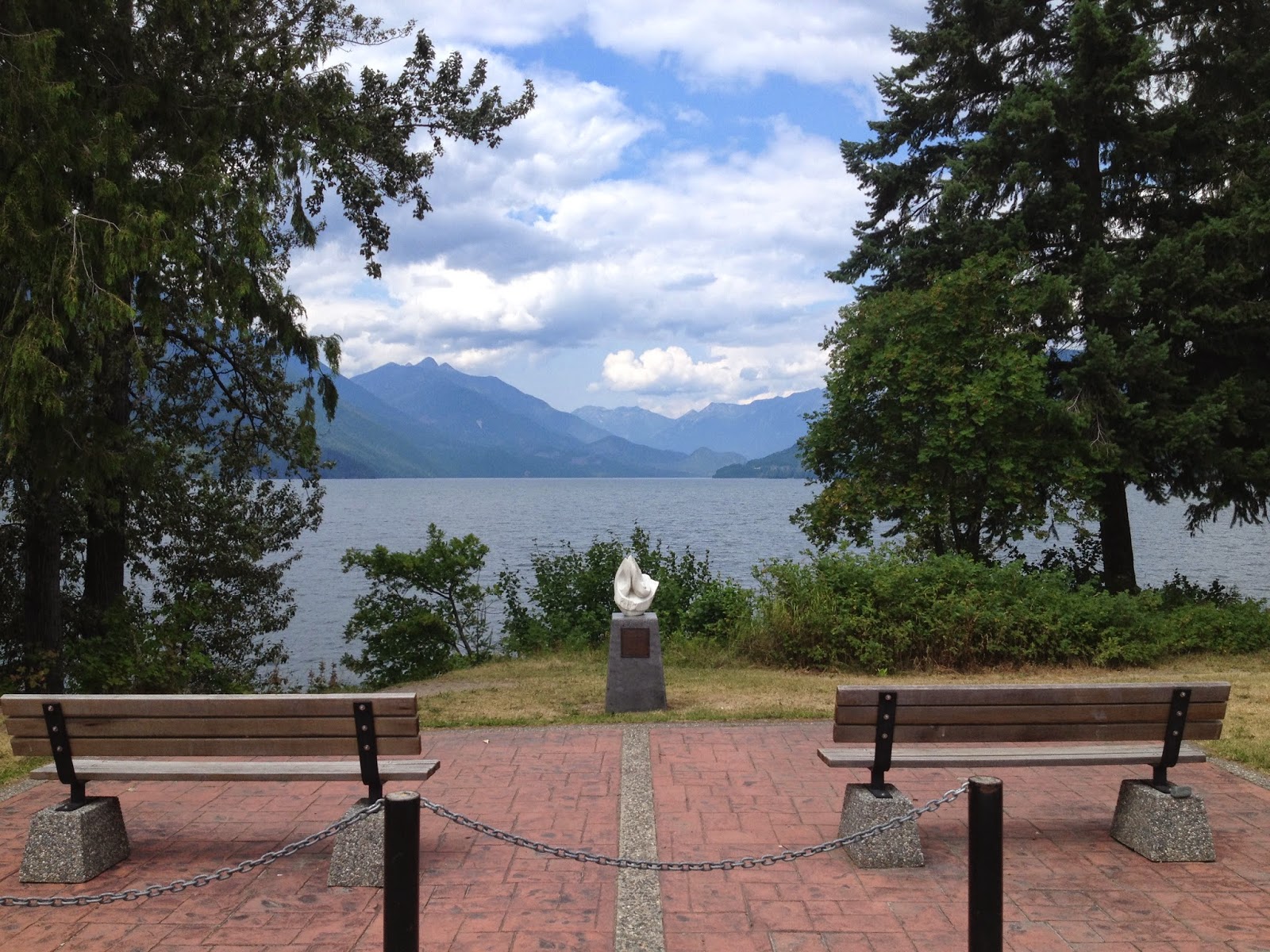 Above and Below: the Nikkei Centre - well worth the visit.  This is where some of the Japanese-Canadians were interned during WW2.  It's fairly shocking when you see the conditions and documentation conferring them little more than animal like status. 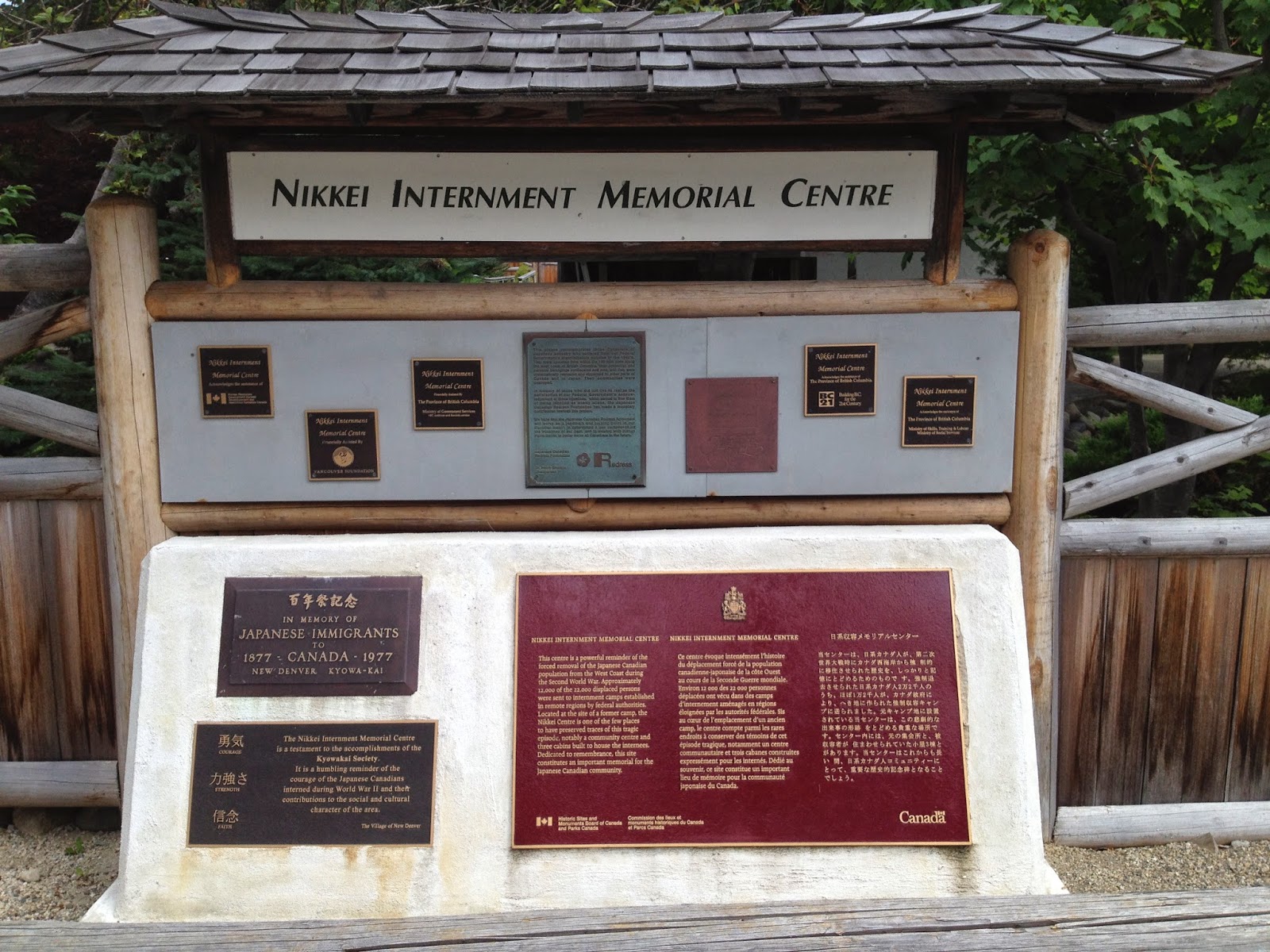 6 Sandon: A side trip to an ex silver mining ghost town with trolley buses, trains, and a dirt road...It's a few clicks down a dirt road, but even 2 up, the VStrom was great. 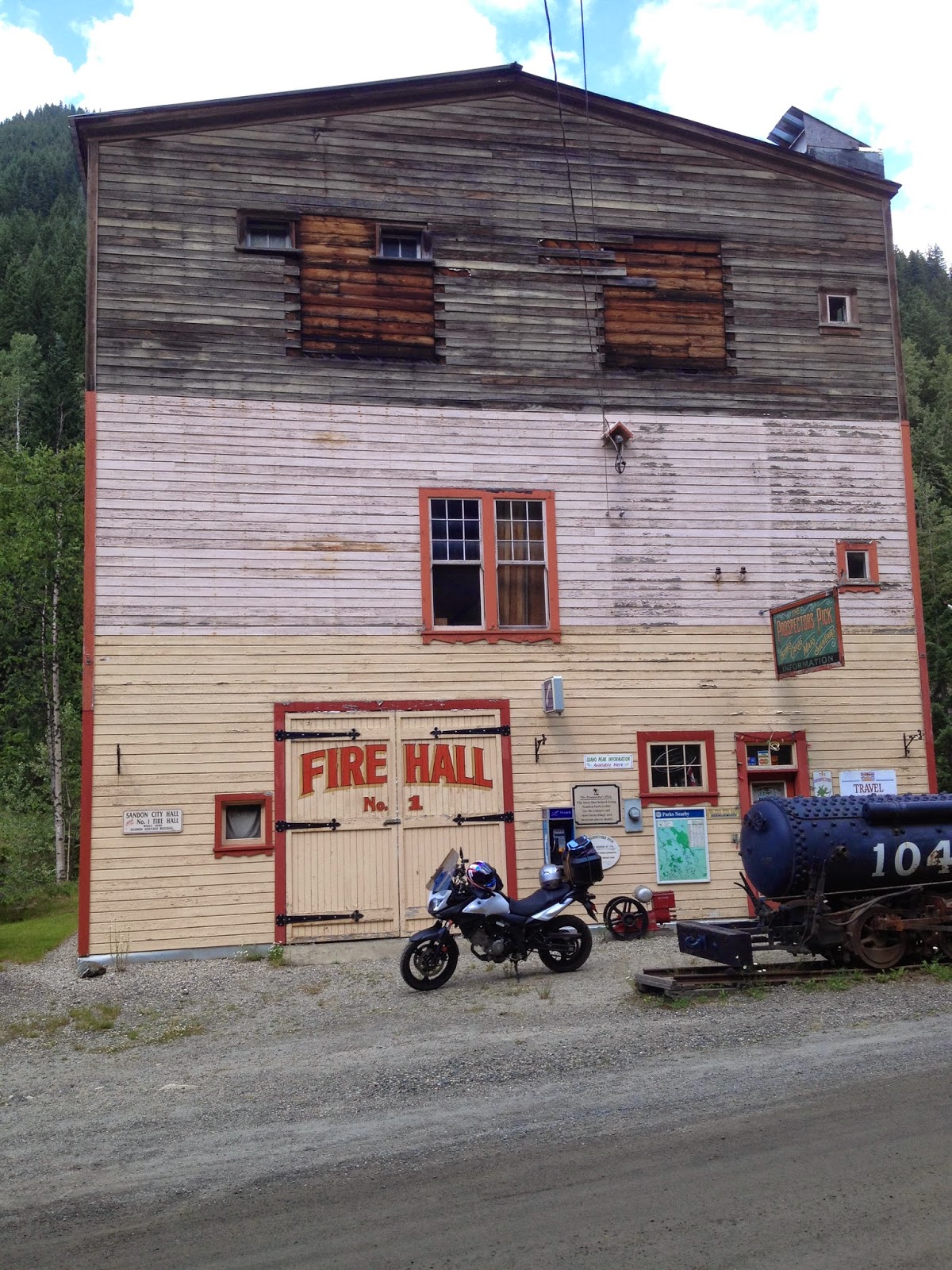 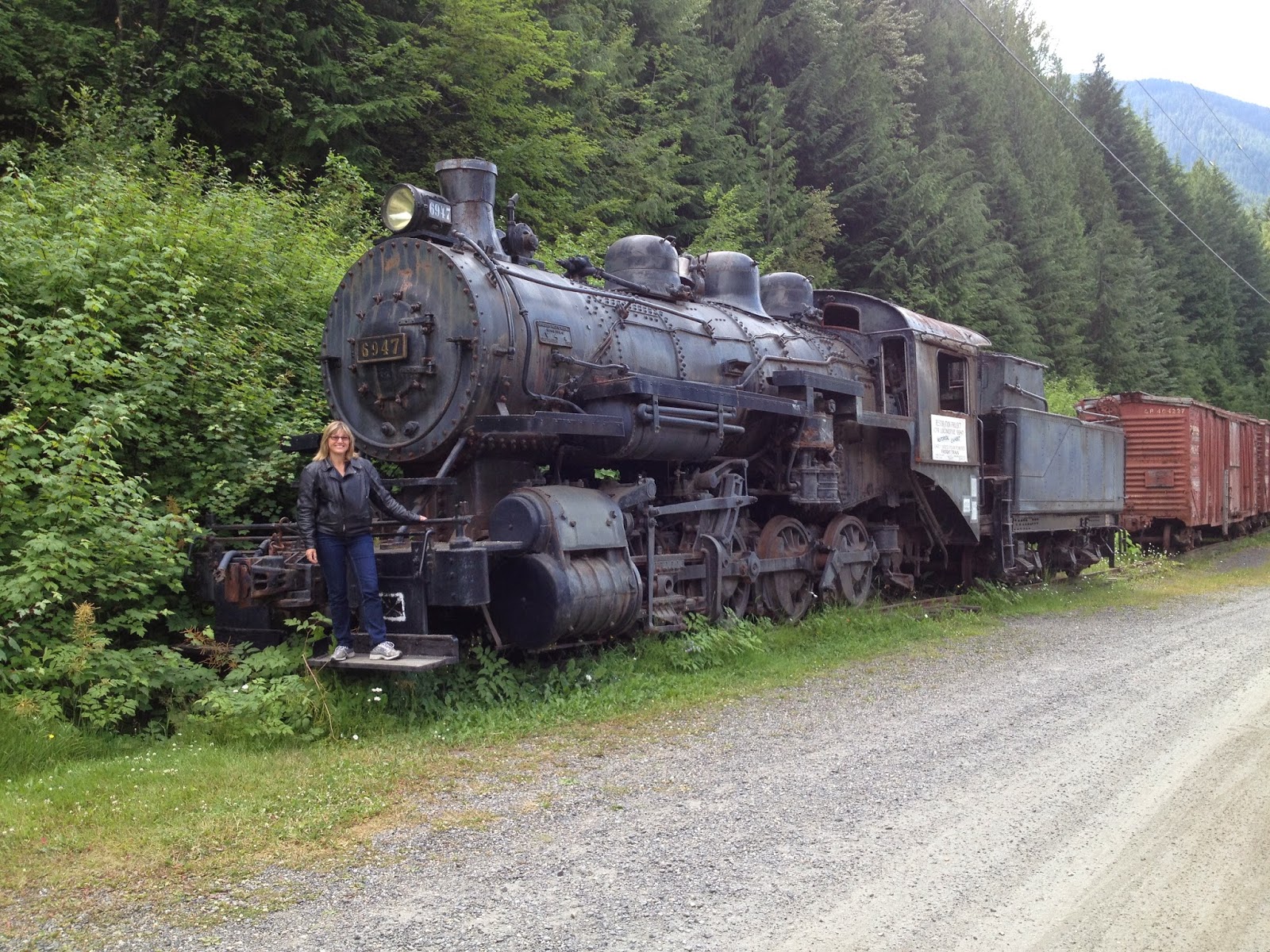 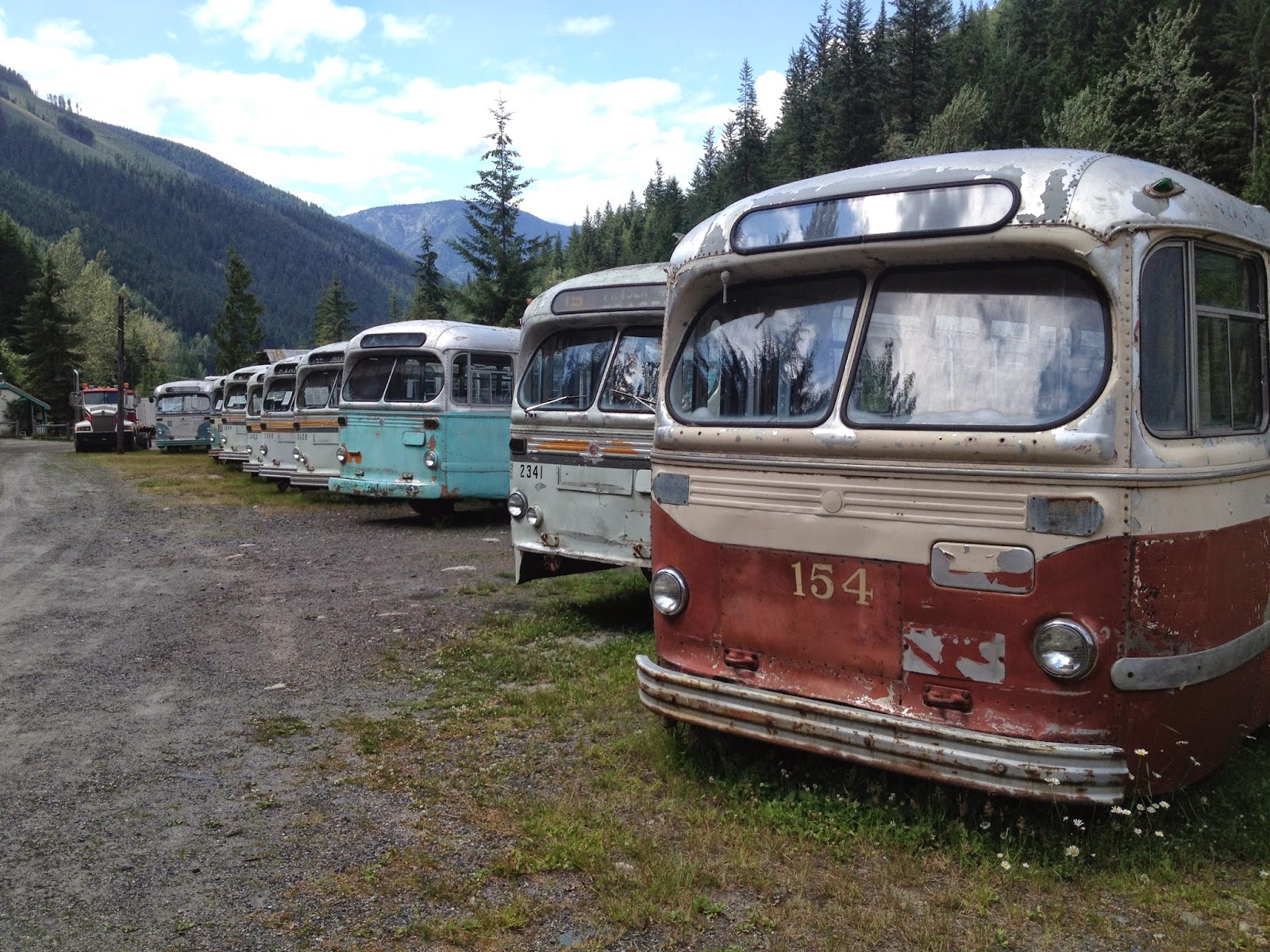 6 to 8: New Denver to Kaslo - the best road I've ridden in BC (DH5?!). DH1 is said to be the Whistler to Lillooet road.  Nope.  This IS it.  It is mind blowing.  Curve after curve after vista after curve, you can see why this is closed periodically in Winter.  And with New Denver at one end and Kaslo at the other, this is motorcycling nirvana.  Hyperbole?  Not a bit.  Ride it. You'll see. Pics and Vid below.  The vid is 8 minutes long.  I cut a lot out...  Traffic is light, the road surface is pretty good. 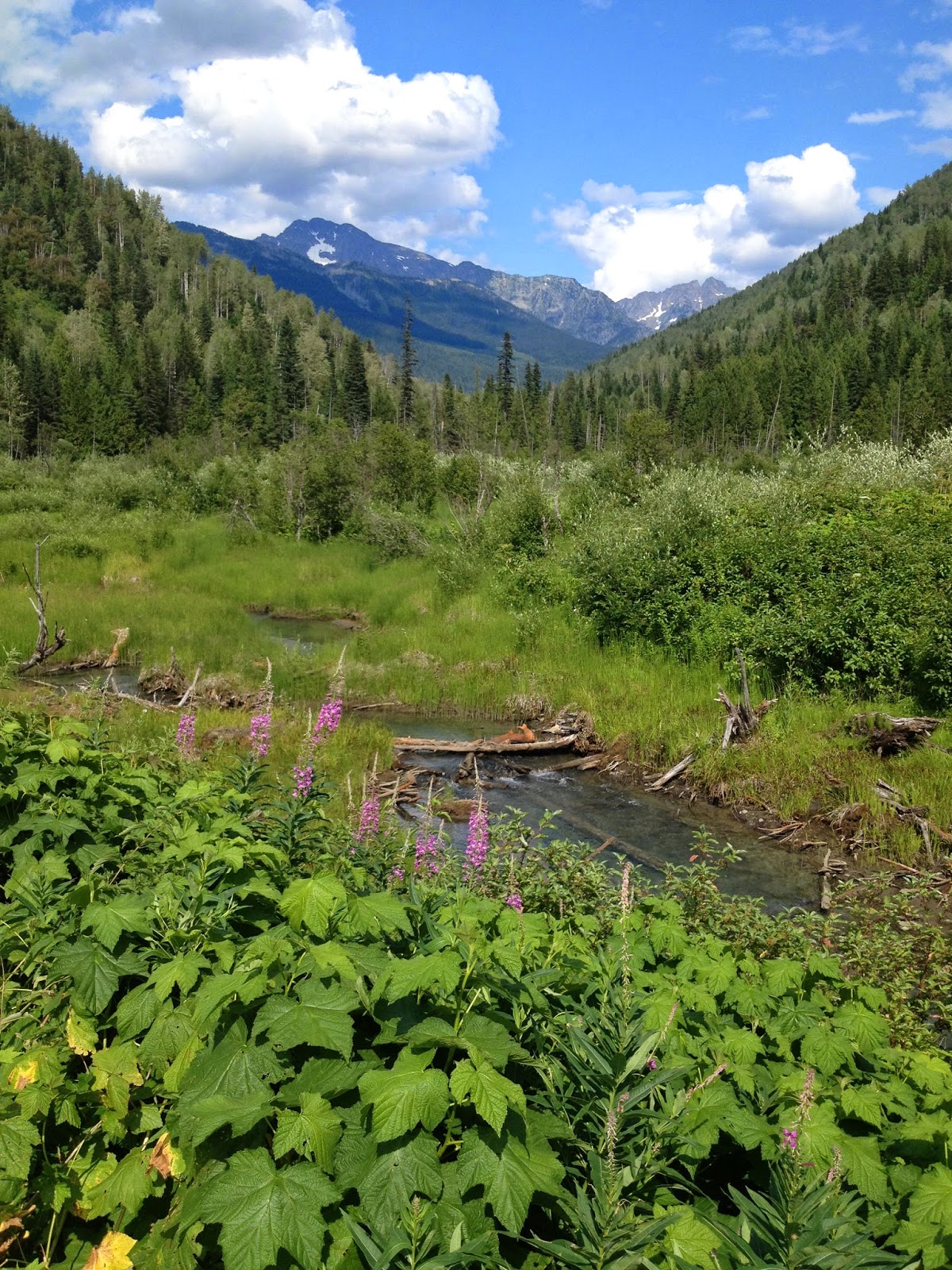 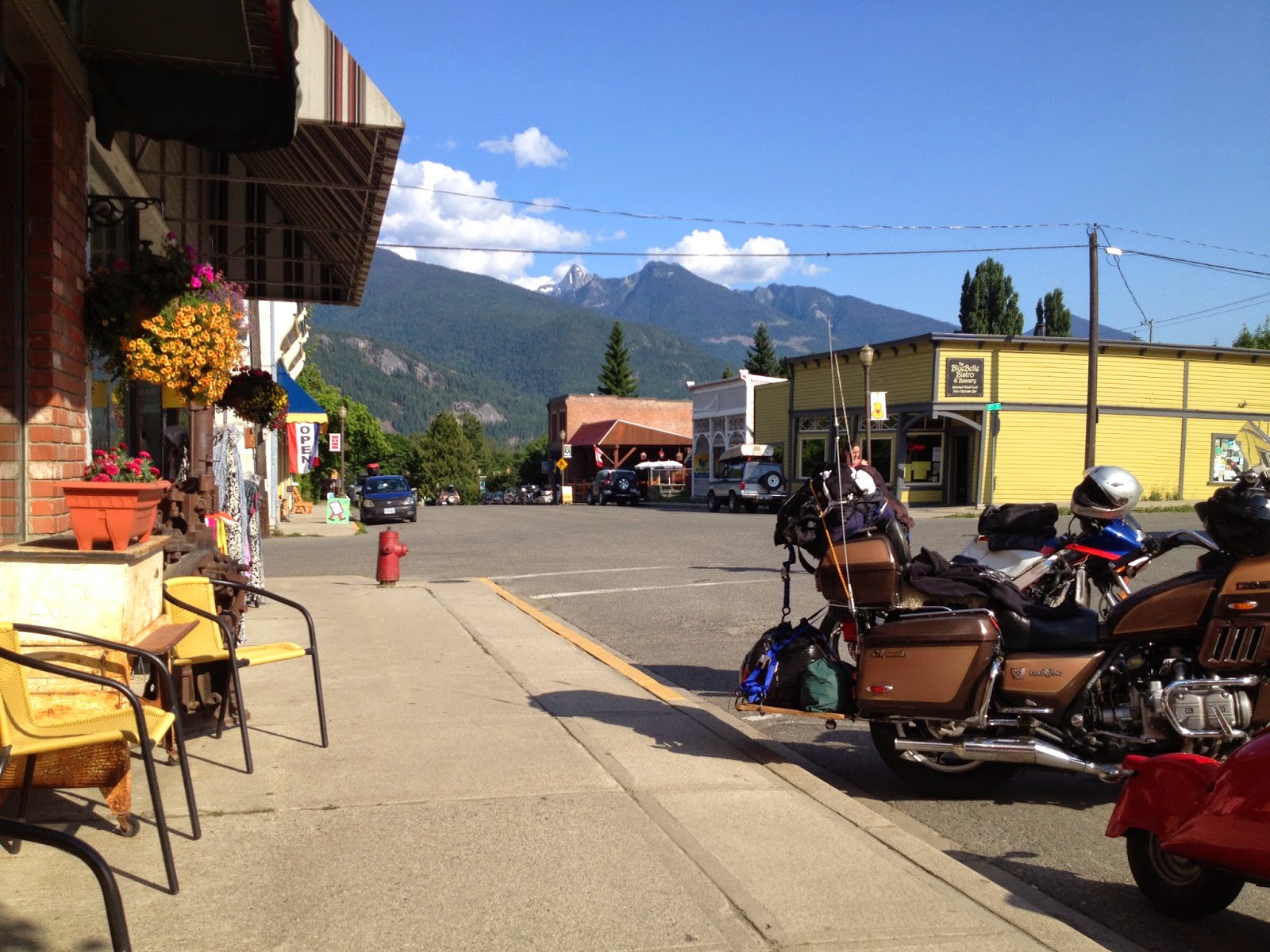 Ahh, the ride...Told you...
Caveate...The video camera is very wide angle, so curves are straightened, hills are flattened etc.  Judge a corner by the lean...

9 Nelson.  What can I say? I was disappointed.  So many people had told me how "beautiful" this town was that when we got there, it just didn't hold a candle to our expectations.  New Denver, Kaslo, Nakusp...they were beautiful.  Nelson...nice setting, great weather, lovely lake, grand view from the bridge on the way in.  Worth seeing, but hopefully I brought your expectations down so you'll appreciate it more?!

New Denver to Nelson segment of the track is available here.