OK, might as well come clean.  You'll notice two routes, one red, and one green.  The green was the route we had planned to take. The red was the route I mistakenly took, despite clearly seeing a sign showing me the border was imminent, and my iPhone screaming at me to turn left...I veered right.  As it turned out, it was great.  We met the Columbia River for the first time this trip.  I've crossed the mighty Columbia at its estuary in Astoria, Oregon, but I have never seen the headwaters.  Trail was a really interesting ride, and Rossland, wow, what a climb on an excellent twisty four lane highway with a ridiculous speed limit.  Needless to say, I decided to ride it as if it was in miles per hour rather than kmh in order to pratice for the upcoming border crossing...

1 Paterson Boarder Crossing: Well that was easy.  Basically from Rossland (very cute) you are descending a 7% grade for many clicks...  You think this is great and blast along, with no other cars.  A few questions pop into your head and one of them is, "Why is this road so deserted?   It's an excellent road!"  You see a large semi in front, and pull over the double yellows, down hill to pass the truck (which is hauling).  As you sweep around the subsequent bend, your question is answered.  This is the only road out of Rossland south, with no turn offs and that, right ahead, is the Paterson US Border station.   And they're watching you overtake this truck at twice the legal limit.  Welcome to the US, son.  Is that a graduated slow down series of 70, 50, 30 kmh signs you've just blown through?  The truck, it appears is just as surprised at the abrupt border station, and has to pull into the oncoming lane as his brakes are overheated from the 10km of down hill grades and he's not sure he can stop before he smears you into the border guard's bollocks.  But the American border guard is standing outside his booth, facing you with one hand on his hip and one palm up, legs apart, daring you and the truck to nudge his tackle.  Prepared for the worst, he directed us to remove our helmets.  Thank Christ my wife has a nice smile.  He held out his hand for our passports and directed his attention to what he referred to as "my little cookie on the back".  Works for me.  We were waved through in less time than it took to slap our helmets back over our chops and in the land of the free, home of the brave, and more importantly, cheap goods and services.

2 China Bend: There's no reason to stop here, except to change your bike's computer to MPH and MPG (imperial or US).  But the Columbia takes a significant turn here, and there is a rest area.  We decided to walk out on the huge metal dock next to the boat launch.  The signs warn you not eat more than one each kind of fish you catch here per month as the river is contaminated with heavy metals: copper, mercury etc...  I thought back to the smelter right on the river in the middle of Trail.  No wonder the Americans think we're cheese-heads.  Why would you continue to run a smelter mill adjacent to a river that serves as drinking water for hundreds of thousands?  Who would build a mill in down-town Port Alberni?...But I digress.
3 Kettle Falls: Whisking along the Columbia for a few miles you get to the small community of Kettle Falls.  Gas - yes.  Cafe - yes.  Cheap, hell yes!  Big bowl of soup, large fully loaded sandwich, served with coffee, apple pie and a smile.  $4.99.  Plan to eat here.

4 SR20: It stretches east to west right across Washington State.  It is an amazing road - very light traffic, with large sections closed in the Winter due to its altitude and the snow cover.  Mostly it is two lane, extremely scenic, curvy, with elevation changes and, remarkably, excellent surfacing.  In fact, I have to hand it to the Washingtonians, they know how to pave and engineer their roads.  This one is exceptional - banked and smooth.  And the signage is amazing.  In Canada, we post things seventeen times, caution riders/drivers up the ying-yang, and post yellow signs that seem geared to myopic octogenarians with palsy driving a Model T in a tempest.  The contrast, on this road, at least, was refreshing.  There's a sign.  It tells you there is a sharp left or right hand corner ahead.  Not miles ahead, but now.  It suggests a speed limit, and you quickly learn that unlike in Canada, you don't triple it, but double it.  It's almost as if they realise you're going to push your limits on this road. Unless it rains.
5 Sherman Pass:  The rain passed, and by the time we reached Sherman Pass, it was drying nicely.  I was surprised that we were basically at the same height as Mount Arrowsmith back on the Island.  There was no hint in the bike's performance or the air temperature, perhaps because we were approaching desert... 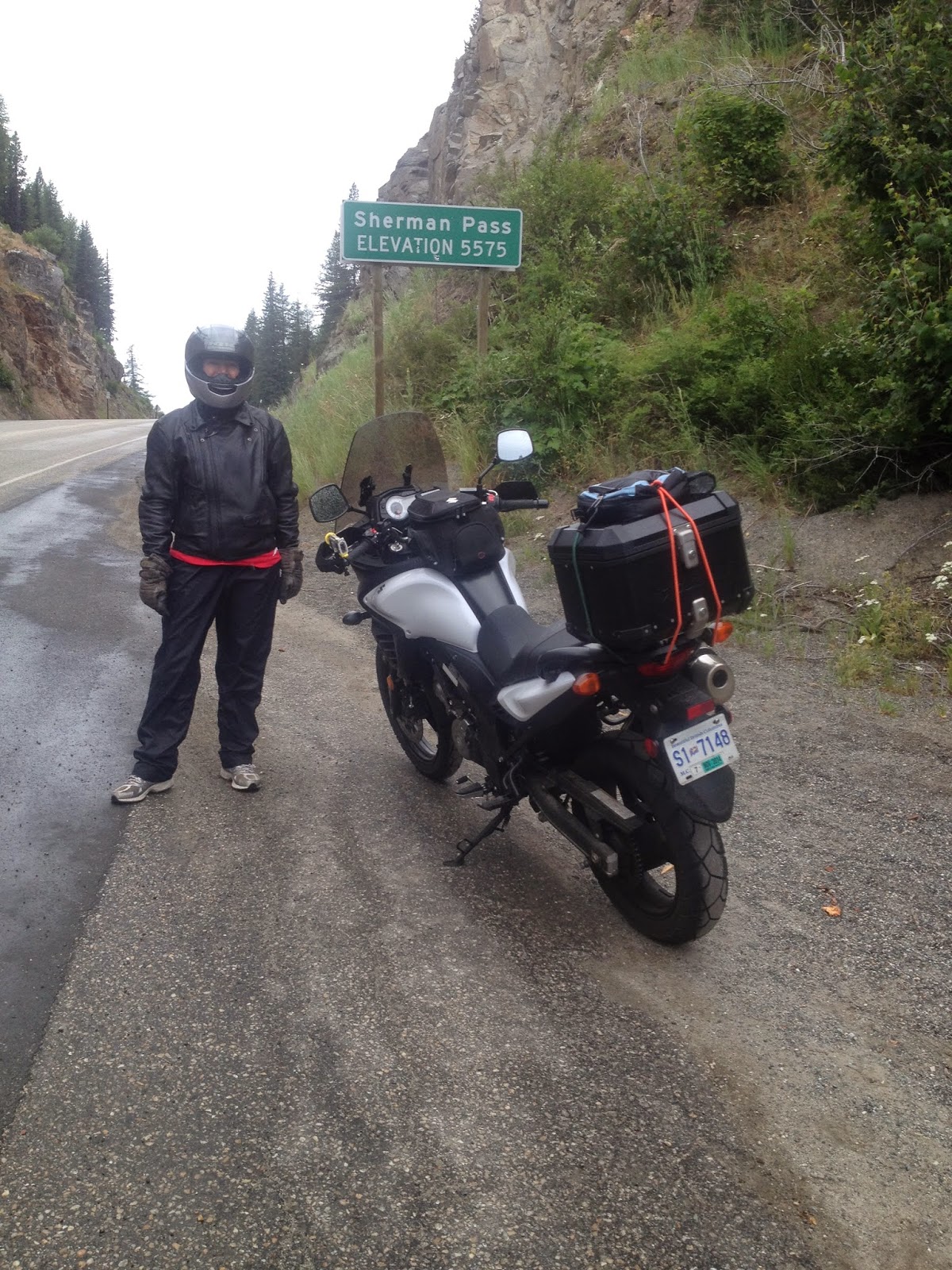 6 Wauconda: We didn't stop. Heck we didn't even notice it really.  But it has the curious reputation of being one of the few towns actually sold on Ebay.  Sorry no pic...it shot by quicker than Spuzzum going over Niagara Falls.

7 And just like that, you fall into desert heat.  The temperature rocketed from 70 ish to, well, very hot.
8 Tonasket and the Bean Trees.  I started to wonder if everyone was called Jack around here.  The trees are curious - I've never seen them before - large leaves with what look like very long runner beans hanging down.  I'm told they not edible.  Right though to Grand Coullee, they are everywhere: a desert-tolerant deciduous perhaps.  Anyway, it was late afternoon and time for a coffee and apple pie. 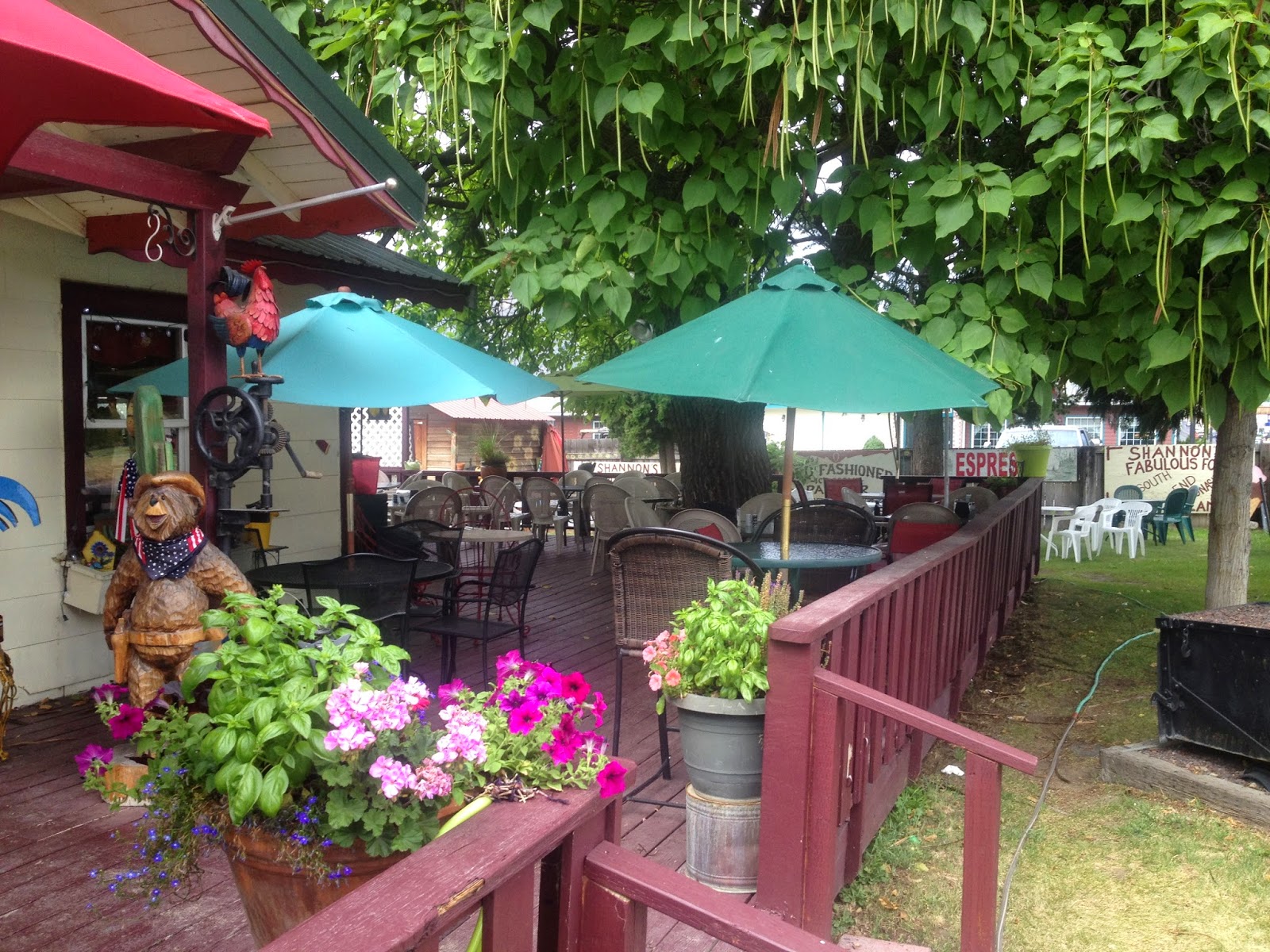 9 Desert...hot...: The scale of this land stood out.  We ran beside sage brush covered ridge for a while, with oasis like green patches snaking beside some unknown river off to our left. Pictures don't do this landscape justice - it's too big, too grand to be caught and adequately rendered by a micro-lensed camera.

10 Omak: If there's a recurring theme of this ride, it's that we would have rather stopped somewhere else.  The Royal Motel was excellent - very good value, spic and span, a real mom and pop operation with nice touches and excellent value $49 a night...try that in Canada (no don't - you'll likely wake up with bed bug bites and the clap).  The Mexican restaurant was the best we've eaten at bar none (and I include San Diego venues, Mexican venues etc...): Rancho Chico.  Wow.  The food was excellent, no dross, real Mexicans, serving real Mexican cooking.  High quality ingredients with a smile.  Again the price was out of this world...The same meal at Gina's would have been three times the cost, and half the quality.  But the town itself is fairly devoid of any aesthetic or cultural attractions.  Now Winthrop.  That's a town!