We're still hacking away at finding a shorter route to Nanaimo River Rd. that bypasses yellow logging gates.  We have our current standard route, but it's close to being unusable as the winter and snow approaches.  In addition, the standard route is quickly becoming unusable as young alders are growing so rapidly that the trail will soon be overgrown.  (C'mon quads--we need you out there).

Paul and I decided to explore another possible route through from the "power lines trail" heading out towards the logging roads on Mt. DeCosmos.  Google Earth shows a faint line that could have been a connector: 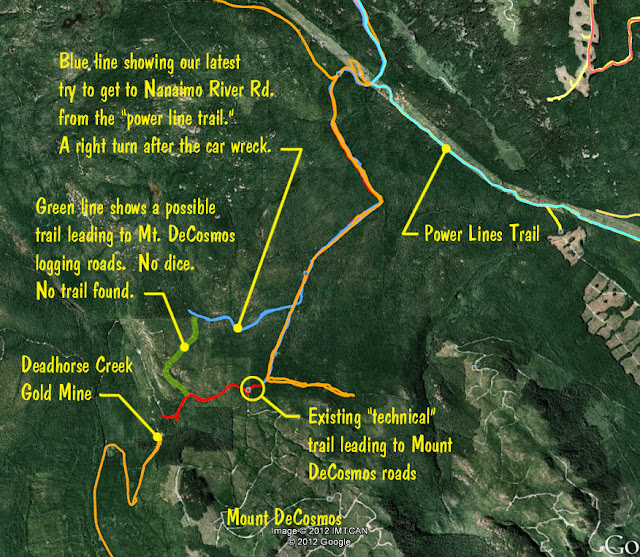 What a disappointment!  The blue trail turned out to be a good road, old and well covered with deep moss with many alder saplings.  Too bad that we didn't find the elusive trail...  It was looking pretty good for a while, but the line visible on Google Earth must have been an old creek bed or a road so old that it's long gone.


We headed back to the main trail (orange) and revisited the route we had walked a few weeks ago that does lead to the DeCosmos roads, (shown here in red), but the rain has taken over and it's now a pretty steadily flowing creek over roots and well-sized boulders.  This isn't a good alternative route, at least, not in the winter.


So here's the next try.  I don't know why we haven't tried this yet!  I had it earmarked as a possibility some time ago, (I think Paul might have too), but as yet we haven't given this one a try.  I'd like to give it a go next weekend if the rain cooperates: 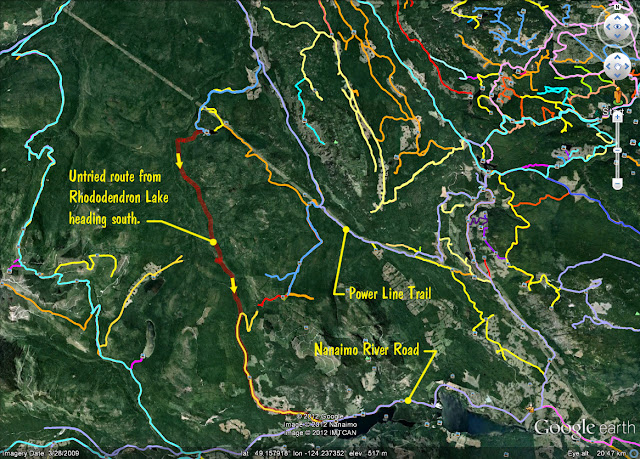