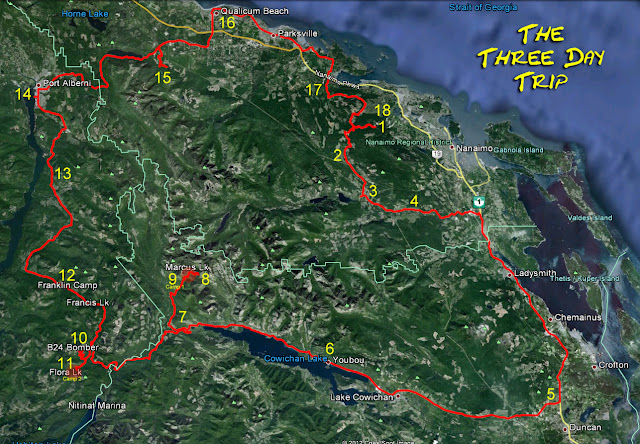 
We planned to enter at Doumont and make our way past Fourth Lake, following a common route to Cowichan Lake.  It didn't go as planned: We got as far as the Second Lake gate where the usual gate controller stopped us.  Camping at the nearby lake site was open, (for $20), but access to the logging roads beyond the lakes was not.  Apparently there is no access during working days, although access to the area beyond the lakes was to be available tomorrow, (Saturday), for all weekend traffic.  This was a huge disappointment for us, because our only alternative was to take the highway south to Cowichan Lake and enter the same logging road network via Youbou.  This is what we did.

We gassed up in Youbou and continued on our way to our first major destination, Marcus Lake, with a plan to set up camp and do some trout fishing.  We were both impressed with the condition of logging roads throughout this region.  The main busier gravel roads are dusty and potholed, but they're in good enough shape to make some pretty rapid headway.  It was a Friday, and working logging trucks were using the road.  We were both impressed how they make a real attempt to pull over to give oncoming non-working vehicles a wide berth.  They kick up a tremendous amount of dust when they pass!

We turned right along the Marcus Lake logging road and continued an increasing climb towards our destination.  We were both impressed by the quality of this road and how a mountain spur should differ so much from the rocky roads found in the Nanaimo region.  This road became quite steep as we got closer to the lake, and the ride remained very easy throughout. 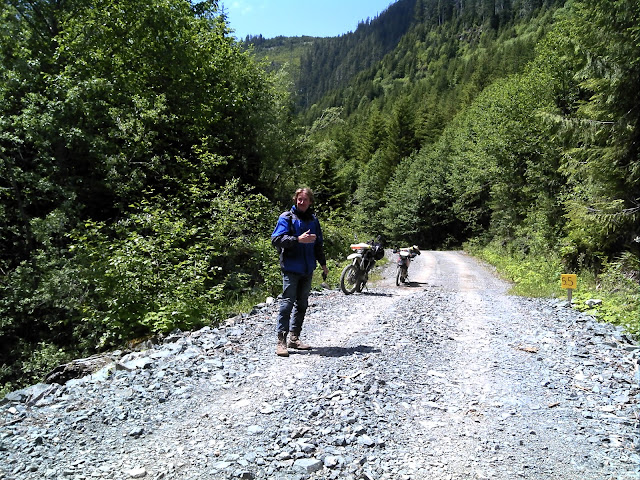 We stopped at the steepest section where a back hoe operator was conditioning the road surface.  It looked difficult to climb in it's current state and we chose to continue on foot to get a look of the lake.  The worker, who had waved us on before we parked, shut off his equipment and assured us that the road would be rideable within the next half hour.  (Friendliest logging worker I've met yet).  :)  Outstanding views towards Nitnat Lake here.

We continued along a spur road that offered some tremendous mountain views.  It eventually came to a dead end as did the second spur we found along that route.  We returned NW towards Marcus Lake and began our hunt for a good camping spot.  There are few on this lake and we eventually settled for the best one we could find; a little boggy and mosquito infested, but it would have to do.  Not a great first night for me.  I guess it's a poor idea to begin a three day camping trip with no breakfast except for a SBuck's dark, black coffee.  I had severe acid indigestion that kept me up the whole night.  Poor fishing here... a trout breakfast might have fixed me up!  :)

We were packed and loaded by 9:00 and ready to begin leg two of the trip.  We headed south, back the way we had entered and followed the Nitnat Main towards the B24 (Liberator) bomber crash site, (Crashed Nov 10th, 1944), that we had seen on "Don's Blog." [edit: Sept 7th, '14, removed Don's Blog link due to malware warning].  This was a great ride up to the crash site.  The road is steep, but the surface is in good condition and riding is easy.  There are a few drainage ditches towards the end of the road that take some concentration, but generally speaking this is an easy-intermediate ride.  I'm surprised we didn't bump into any bears since the road is littered in places with bear crap.  We parked at Don's spot and began our climb up the mountain to find the bomber.


Some background on this plane:

B-24J Liberator Serial Number KH-108 Code AT, was on a cross-country training exercise with crew of 11 RAF in Operational Training for RAF Squadrons in S.E. Asia and Burma:

I'm so out of shape!  That was the toughest climb I have undertaken in quite a few years.  We made our way through large, dry stumps and low undergrowth on steep terrain for about 180m and then began a climb up steeper ground using small bushes as "ropes."  :)  My recovery time was doubling each time I stopped and the distance traveled between each rest was being cut in half.  The site was well worth the climb though:  We found many of the locations shared by Don on his blog and some others he had not listed, including the main part of the fuselage that sits on the summit reachable by following debris up the mountain from the prop location.

Here's a quick movie of Google Earth views of the surrounding area to give a better idea of the plane's location.  The B24 is at the end of the orange trail of course and not right where it says "B24 Bomber."

The amount of damage to this aircraft is astonishing.  There are parts spread across the entire mountain top, particularly along one side where the prop can be found.  Those aboard surely died very quickly judging from the carnage.

It's time for a bit of a rant here:  [on soap box]  War sites like this fill most of us with a feeling of great respect for the individuals who lost their lives serving their country.  Why people find it necessary to scrape their names into the last remaining signs that these people ever existed absolutely boggles my mind.  One name scraper bothered to say "rest in peace," while others made inane comments about guns or just left a name.  In my mind, we visit these places to remember those who perished, rather than giving ANY significance to our own name.  WTF, I don't care that Tom Smith was there and nor should he.  It's self-flattery to think that anyone should give a shit that you ever visited there!  See it... Acknowledge them kindly... Leave with nothing. [off soap box]

After descending the great trail leading to the bomber, we took a right turn towards Flora Lake and set up our tents for the second night.  This was a great camp site: a free provincial site with a good collection of firewood.  We should have spent our first night here I think; much more comfortable and we got the trout breakfast we had missed at Marcus Lake.

The following morning we continued towards Francis Lake and Franklin Camp.  The lake was right beside the logging road... well used, with a large wide boat ramp.  I guess it's far enough away from any big towns to keep from being too busy, but it didn't look that appealing to me anyway.  Franklin Camp is nothing more than a levelled 1960s small logging town.  All that remains is what looks like a water/fuel oil storage tank and the collapsed wreckage of one house at the far corner of town, (just junk left).  The alders are quickly reclaiming the roads and deer are already moved in.  Satisfying to say that we made it to Franklin Camp, but really nothing to see there.  It would make a great go-cart course!  :)

From Franklin Camp we continued north on the main logging road that passes through China Beach camping area towards Port Alberni.  We stopped in Port Alberni for a civilized lunch before moving on north west towards Cameron Lake.  Paul had hatched an idea to follow a network of logging roads that begin travelling south shortly after passing Cameron Lake.  The plan was to connect with the Englishman River Main, a logging road we know, by passing Arrowsmith Lake.


Too bad it didn't pan out: We tried a few roads that either became impassable or were dead-end spur roads.  We returned the way we had come and used the main roads towards Nanaimo instead.  Paul headed straight home to tend to an emergency and I sauntered through Qualicum Beach, Parksville, Nanoose and eventually passed through Sundew Gate and rode to Doumont Rd using much more familiar roads.  What a great trip.  Time for a shower!

Andy and/or Paul at:
the.real.MC.diaries@gmail.com