All rednecks should be given a free Government banjo so you can tell them from a distance!

The 6-7 road is excellent and is the best route to Rhodo from the Doumont side.  I didn't think it would work out that way when I set out today because my GPS map shows a large swampy area along the left side of this road.  I was expecting some deep pools similar to the ones at the swampy area at the start of the power lines route.  It was an amazing, well-groomed, flat road allowing speeds over 70km/h.  The rest of the route to Rhodo Lake was a repeat of a ride last summer.  Nice road into the lake although rockier than I remember.


I fished for twenty minutes only today.  There were a couple of nibbles, but it looked pretty dead...  No rising fish at all.  A group of idiots on the other side were firing rounds across the lake and I decided they weren't bright enough to know anything about gun safety and so I left.  I passed several people arriving with beer cans in hand as I left which encouraged a further spurt of energy into my exit from the lake side.  But back at my bike, I met the king of the local redneck population!  (This is the gene-depleted man who needs the banjo as a warning sign to all who come in contact with him).  Perhaps I'm a greater fool for even attempting to communicate with him.  He told me that the power lines route was clear of snow now.  "Yuh, I jus' bin up there in ma truuck and she's cleeeear awl the way thru."  I took it hook, line and sinker.


The power line route from this end is extremely steep and rocky.  I was well past my comfort level going up this road and the thought occurred to me that it would be a good deal harder coming down it.  Good thing there's "no snow on the power line route."

I made it up in one piece, albeit a little sweatier than I was five minutes before.  That was a ridiculous climb on large chunks of rock and I'm not sure I ever want to try it again!  I sat at the top, recovered my senses for ten minutes and allowed some blood to flow back into my knuckles.

The trail settles down at the top and begins to wind it's way toward the spot where Paul and I got stopped by snow a couple of weeks ago.  I eventually met up with pretty deep snow at almost 700m and gave it my best shot, but it was pretty clear that I had to go back down that #@&!*% hill.  I was 2km from our recent "stopped at snow" location on the other side.

The ride back down was abominable and I was clearly out of my league here.  I don't have the skill nor the agility to swing the rear end of my bike around to descend hills by fishtailing to cut the speed, and I'm not even sure it's possible to do so on rock chunks of this size.  I began an extremely slow and gradual descent by using both brakes to literally inch my way down.  At times it was nearly impossible for me to use the rear brake at all and a controlled skid from the front was all I had.  Thanks Banjo Boy!  What a relief it was to return to slopes where I felt in control.  This was a good eye opener for me.

I returned along the same route through Okay Mountain's back valley and followed the power lines to the same roads I rode on the way out.

I didn't notice these large "inukshuk" style rock pilings the last time Paul and I took this road.  I don't know who did it...  Perhaps the logging company piled the rocks up while building the road.  Formed by erosion?   Naah. 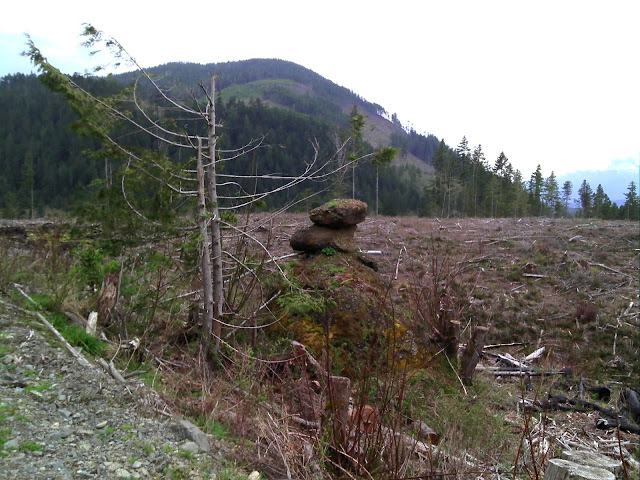 Here's a Google Earth overview of the route to the lake from Doumont: