Another Attempt at Okay Mt.

I had another go at getting up Okay Mountain today.  This time I decided to try another route since Paul recently met the same nasty pile of snow that I ran into a few days ago.  (He claims to have moved my difficult log, but I prefer to believe that the melting snow caused it to drift off the trail by itself).  Instead of using the "around Okay Lake" route, I turned right at Branch 142, (the Boomerang Lake turning), and headed to the Okay Mountain road from the northern end.  Success, but what a hairy road!  The steep sections are quite rocky and in this wet weather they pushed my riding skills to the limit.  I found myself going much faster than I really wanted to go just to prevent the back wheel from spinning and digging into the wet and loose road base.  (Actually, it was more of a creek bed at this point than it was a road).  Very steep, unstable and slippery, and close to the limit for my riding skills!  Eventually, I was stopped by snow anyway! 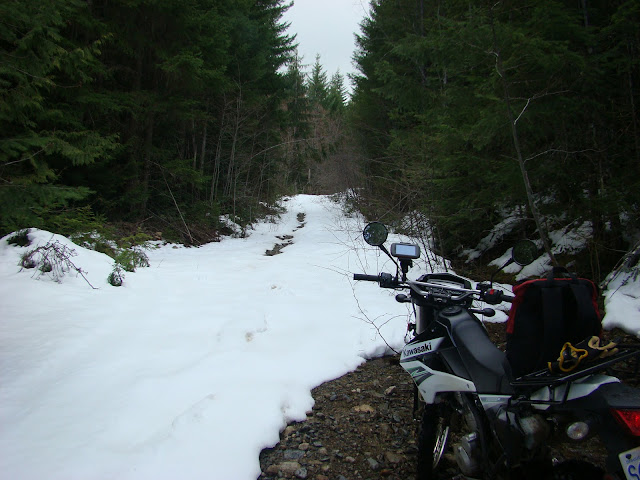 I think when the road dries up it will be a terrific ride; still difficult, but very do-able.  I turned and went back down with a satisfied feeling of having come that far.  Google Earth shows a steeper section towards the top of the mountain.  Might be a harder climb than I had envisioned.  It was a pretty slow descent in some sections on the way down!  I reached the Okay Mountain turnoff, took a panoramic photo facing the coast and turned right to see if there was any snow on the familiar road that circles Okay Lake. 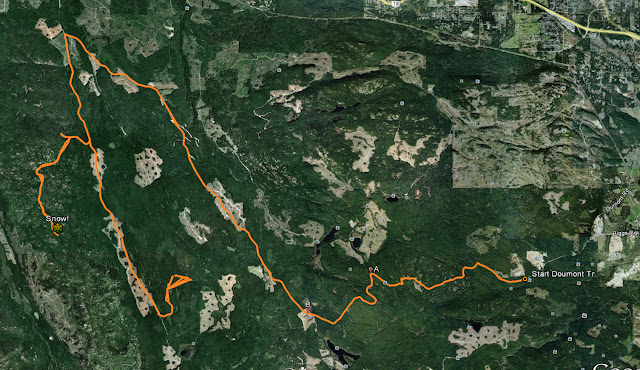 About half way along the route I decided to turn left on a well-marked logging road to see if it would take me back to Branch 142, (the road I had taken to get out here).  The quality of the road was pretty good and I think it would have taken me all the way back to 142 had I not been stopped by my GPS!

Once again this top-of-the-line Garmin product had taken me into unknown territory only to switch itself off repeatedly.  I refused to go further without knowing where I was and backtracked my route by memory, (which is very chancy for me I can assure you).  Too bad because I'm pretty sure I would have made it after looking at Google Earth when I got home.  I was steaming mad at Garmin who have taken a sizable bite out of my wallet to get me lost like that!

I googled "Garmin Montana shuts off" when I got home and discovered that the problem may be a poorly fitting battery and loose housing.  The battery moves when jolted over bumpy terrain and periodically loses battery contact.  I've addressed that and now I'm ready to give it another try.  I came really close to returning it to the store today!

Their advertising says: "Built rugged, waterproof and tough. Includes routable maps, supports 24K TOPO maps. Paired with an ATV mount, is ideal for hunting and off-roading. There's nowhere Montana won't take you."   What a laugh; one bumpy road and the unit quits.  I guess the designers are not familiar with the real conditions when off-roading.  I'm not impressed!

I shut it off after the tenth automatic reboot and retraced my route back through the tank traps to civilization.  Aside from the Garmin annoyance it was a really good ride!