Going to the Sun Ride, Day Two: Golden, BC to Three Hills, AB via Drumhella, AB

As we locked the “his and hers” panniers onto the bike after breakfast the next day (mine was the small one with the exhaust cut-out, but I digress), we bumped into the American Harley Rider and his Canadian wife.   The bike had New York plates and that instantly got our attention.  They had met online years ago, and she’d moved down to get married.  Since then, every summer they planned a trans-continental ride.  I haven’t got time here to list off the places in North American they’ve ridden to; it would probably be easier to list the ones they haven’t.  They had lots of questions about BC and we chatted and chuckled for about an hour.  We steered them towards the Arrow Lakes and Nakusp, which we had stopped at on our last ride.  He proudly showed me his bike, trailer and the many upgrades he had done to it to make it reliable and comfortable, including a massive oil cooler from a diesel truck sticking out to port on on the crash bar.  It didn’t look very aerodynamic, but he swore by it after experiencing a near seize with the HD aftermarket Screaming Eagle accessory oil cooler.  A simple flick of the switch, he said, and you could watch the oil cap thermometer drop by a staggering 100f in minutes, even when idling in the Arizonan heat.  I imagine if the engine failed, you could flick the switch and be supersonic in seconds flat for as long as the battery lasted, which wouldn’t be very long as every known accessory to man (and frighteningly, woman too) would suck the juice from the battery quicker than the fan would blow the froth from your latte-maker onto your wife’s heated socks.  His only fear was a repeat of a final drive belt failure caused by a small rock, which he had suffered once before.  The whole back end needs to be removed in order to replace that. He looked at the big Zuke and said he envied the chain and water-cooling; Iris looked at the plush seat on the big HD, and I could tell, briefly entertained the 90s wife-swap fad.


Stopping in Revelstoke for coffee the previous afternoon, a pair of HD owners had told us about Takakkaw Falls.  While the falls were amazing, they were really tickled with the tight switchbacks to get up there and the short walk to the base of them, where you could be frozen bathed in the mist erupting from base as they hit the pool below.  So our first stop, en-route to Banff for lunch, was the short 60km ride to the Takakkaw Falls turnoff after the small hamlet of Field, BC, set in a small flood plane with an exquisite backdrop of mountains.  Turning left, we ground to halt when we saw a sign indicating that this was within a national park, and moneys would be taken at a booth further up the road.  Riding on, we expected to see a booth but never did.  It was only on the way down, that we saw we had missed one hidden on a turn-off to a camping spot.  Fancy that.  We had passed a few parks vehicles on the way up, but none had bothered to check us.  Parking was the same.  Cars were flaunting their multi-dollar passes, but our bike was studiously ignored.  Sure enough, the ride up was both spectacular and exciting.  Cars had to make three-point turns to make the switch back corners, but we were able to glide around, with no problem, apart from being blocked by incompetent drivers doing five point turns.  But, I have to disagree with the riders we had spoken too that morning: the jewel in the crown wasn’t the road-as good as it was-but the spectacular Takakkaw falls.  Quoting the Parks site is probably the way to go here:

Tumbling 254m (830 feet) in one stretch and 384m (1,260 feet) in total, Takakkaw Falls are among the highest in Canada and the gateway to some of Yoho’s most beautiful hiking. Feel the spray at the base of the falls or enjoy views from afar. Accessible mid-June until mid-October to small vehicles and bicycles only due to steep, tight switchbacks. 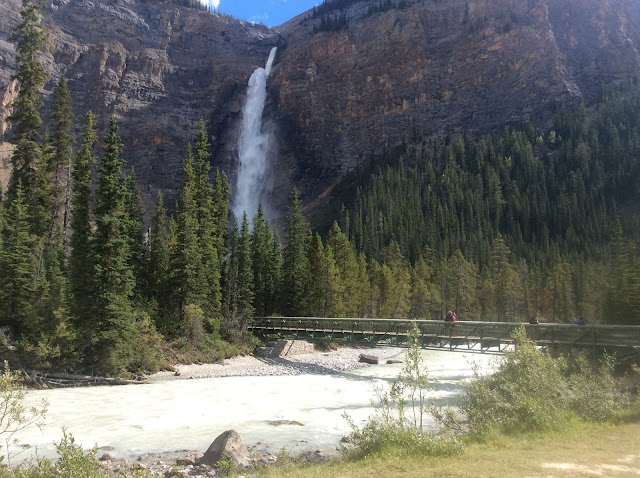 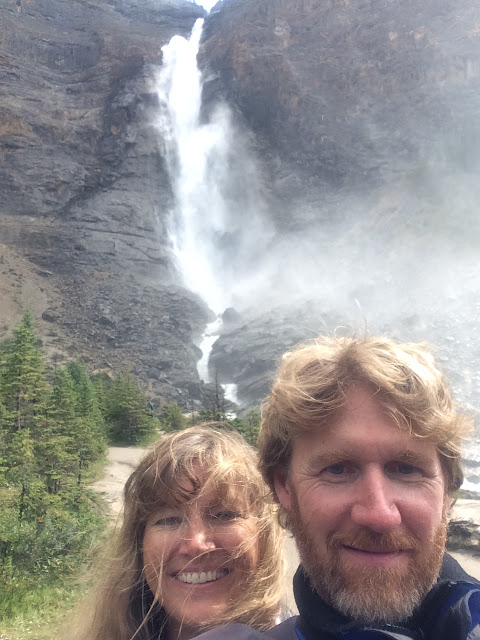 They are staggering, and the backdrop is spectacular.  Worth a ride. 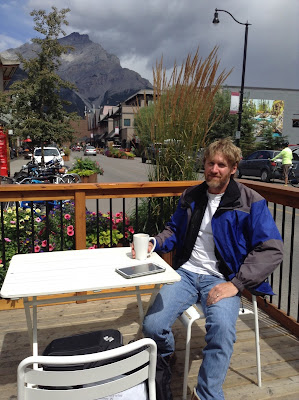 Lunch in Banff was at the Wild Flour Bakery, sitting out on the sidewalk deck in the sunshine.  A child at the next table was giving her parents a sage lesson in dispute-resolution using a firm but calm consistency, as in she had it; they didn’t.  This was the typical power-struggle about food that all parents know well.  The child, who had succeeded in tying the doting parents into exasperated knots using logic, then emotional blackmail and finally setting mum and dad at each other’s throats, sat resolutely refusing to pile into her untouched sandwich as it withered in the sun.  Moments later, a small smile tickled my chops as the child victoriously tucked into dad’s pie and iced cream parked in front of her.  The parents sat silently watching.  Spent.  Yet another reason to travel by bike.

The ride to the Royal Tyrell Museum, just north of Drumhella was my first experience of riding the Prairie.  The novelty wore off quickly.  We cut off the TC1 at Morley, AB, and followed the Bow River to Cochrane, which initially was squiggly and picturesque.  Then we turned north on the #22.  Reading the small highlighted line on the map through a plastic weatherproof cover on my tank bag was not easy, but when the rain started, it became harder still.  Luckily, we were on dead-straight prairie roads and the navigation became easier than staying awake.  I played little games, like looking at road signs and wondering why the hell they’d call a place Balzac?  As if by association, mine started to complain.  The monotony was momentarily purged as we made a right turn and headed east near a place called Dogpound.  Again, why?  Surely there was something, anything, else you could have called your home hamlet? 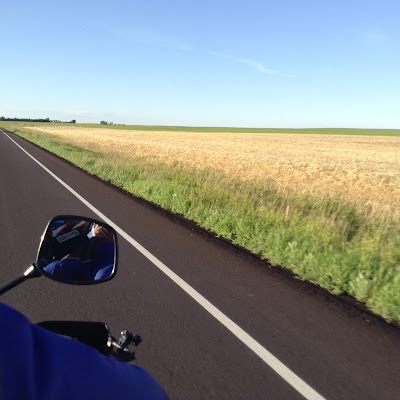 Heading east for 127km on dead straight single-track-township roads was, again, a novelty at first.  But, my God, the horizon never gets closer.  Looking ahead to the east, winding the throttle on and tickling well into the triple digits, didn’t make anything come closer, except the (sorry kids) fucking huge, dark thunderhead now looming off to the northeast-which at least offered a contrast to the yellow and brown fields on either side.  The storm seemed to be tracking south in sync with us.  Great.  The rain had sprinkled, but ahead there was a solid line of black cloud, with a skirt of heavy mist which looked suspiciously like rain exploding off the horizon and bouncing about 500 metres high.  More as an excuse to give my balzac a break, I stopped and sagely suggested we don the wet gear, knowing in my heart of hearts, that this would, at best be futile effort to delay the inevitable drenching we were both going to get.  Wifey, though, was blissfully unaware of the upcoming magnitude of the deluge to come.  Good thing.


It was about at a place called “Acme” – I kid you not, Acme! - that we were bombarded by raindrops the size of balzacs.  By the “Carbon” turnoff, we were dry.  The storm blew through quicker than fart on a stag night. and we began to see a small deviation in the road on the horizon.  Fixedly, I stared at this spot, mesmerised by the potential turn.  We shot down into what is called a coulee.  I genuinely wondered if I could remember how to make a turn on a bike, and whether we were too fast for this 60 degree turn.  Wow.  I swear to God, that this coulee was, at that time, the most beautiful spot I had ever seen, and that included the Takkikaw Falls earlier.  We dipped below the surrounding brown prairie into an olive-green wonderland, essed brilliantly through water-chewed rugged deserty canyons, over a bridge, flew passed a jalopy being driven by a cowboy hat and a blade of wheat, and up and out of the oasis to follow the Red River on our left shoulder.

The museum was great. 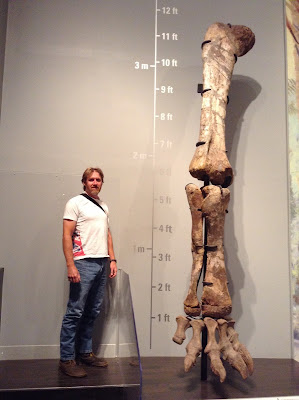 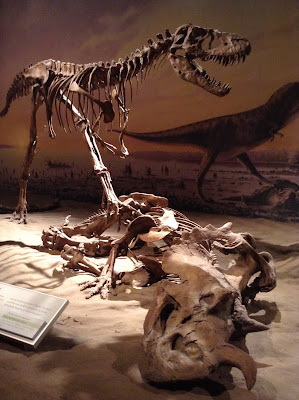 From Drumhella to Three Hills is 45 minutes north then west through more interminable prairie.   The only thing of note in Three Hills apart from our nice hotel – The Best Western Diamond Inn - are the appalling reviews of the food in the attached, air conditioned, “Bell 720 Restaurant”.  Those reviews couldn’t be right could they? Yep.  Don’t order the cold wallpaper glue with hot water and bits o bacon, advertised as Fettuccine Carbonara.  For the full experience, bring your own Parmesan as they were out the night we were there.  But, strung out by the ride, I downed the stuff and smiled while I supped my beer.  Day 2 done.

Sure hope the riding improves from here.