2 Provinces and 3 States: The Going To the Sun Ride 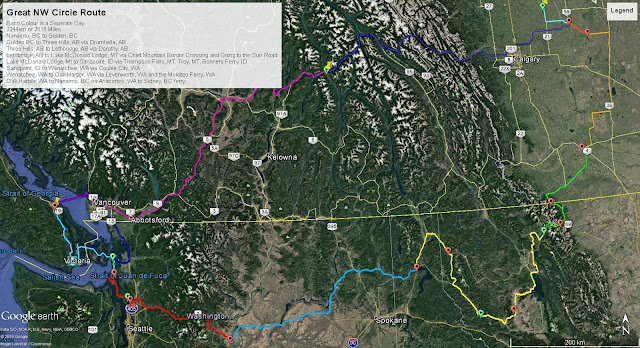 (The overall route: each day a new colour.  Click to enlarge.)

Even the name sounds evocative: “The Going To the Sun Road”.  It was a ride I had wanted to do for a while.  My last multi-day ride was two years ago on a different bike – two up on a 2013 VStrom 650.  I’d loved it, and found a two-week window in my busy summer to sneak a rare long ride in.

So, together with my wife and some hazy ideas about what we would find, we headed out on an early August morning ferry and liberation from Vancouver Island.  The route is 3,224 km long and I have split the ride up by day.  It includes a ferry, 2 provinces, the prettiest international border crossing you’ll ever ride over, 3 states, and another ferry back through the San Juan/Gulf Islands.  This is one spectacular ride, with curves, elevation and & beauty in abundance.

While I have only done one multi-day road trip before, I have ridden all my life in several countries on many different machines.  Primarily I am a local rider now and, if you’re a regular reader of this blog, an enduro rider.  Unlike my last multi-day trip, we had more luggage, but still packed very light.  Originally we had planned to camp for the trip, but my wife, fortuitously for her, won a Best Western gift card of $1000US.

So, “we planned to stay in hotels/motels and scotched the camping”.  But I wouldn’t compromise on the route, no matter if there was a Best Western near it or not.  Spousal negotiation finalised, hotelling gave us more room for some clothes and tools, so it wasn’t all bad.

I bought the bike new with no km on the clock in 2015 after trading in an un-ridden virgin Harley I won – a crap bike, but I digress.  The 2014 Strom1000, named Simba because of its colour,  had been lost in a warehouse back east with a few others, and Suzuki Canada had sent one to each of the top vendors in each province with order to get them out before the 2016s came in.  So when I saw the ad for a virgin khaki Vstrom 1000 for $9999 including PDI and Freight in Kijiji it was too good to pass up.  The only thing that would shift my beloved 2013 Vstrom 650 out of the door was 2014+ Vstrom 1000.  The 650 had been the smoothest, most reliable, most awesome bike, even two up, but after riding the next generation 1000 I had to have it.  The immense torque, added power, and less top-heavy feel won me over.  I added hand-guards, a lower cowling to protect the oil filter, side cases and changed the windshield as I’d had to on the 650.  My only complaint about both bikes is the windshield: the buffeting from them was enough to give me double vision.  A Givi Airflow 18inch fully adjustable up/down and forward/back was enough to smooth things out on the 1000.  The suspension is amazing stock, but the seat can be a little testing on those 600+km days.  So my wife got the wool cover.

I now recon I have the perfect bike for me.  It’s lighter than a GS1200, handles like a big super moto, and the v-twin chucks torque out like Trump tweets.  It is smooth, fast and handles like a dream.

But, IMHO, like any over 650cc bike, it’s NOT an off road bike.  Technically you can take it off road, like a GS1200, but anything over 350lbs is, at best, a liability off road.  There are far better machines for traversing dirt than bloated Beemers, Litre+ KTMs or Vstroms.  The long suspension is amazing on the road, but would be far too stiff for my liking on the dirt.  The tyres, are good on the road, but on dirt would be a death sentence.  So, for that reason, and the fact I was two-up with my much-prized incubator, this trip was black top only.  And that suited me: I have a 70 degree Husaberg for the fun stuff!

Over the next few weeks, I will post the following and update the links:


Day Eight: Oak Harbor, WA to Nanaimo, BC via the Anacortes Ferry.