Riding Over Okay Mountain from the S.E..... Almost!

We had an interesting ride yesterday.  Sebastian had been plotting a route from Errington to Doumont that went over the top of Okay Mountain.  Having tried part of the route before and having been stopped by snow and a steep climb up Okay, it seemed to make more sense to attack this route from the Doumont side:  The steeper rocky section would be easier to ride down coming from the S.E.  Now we just had to find out if the trails marked on Sebastian's route were rideable. 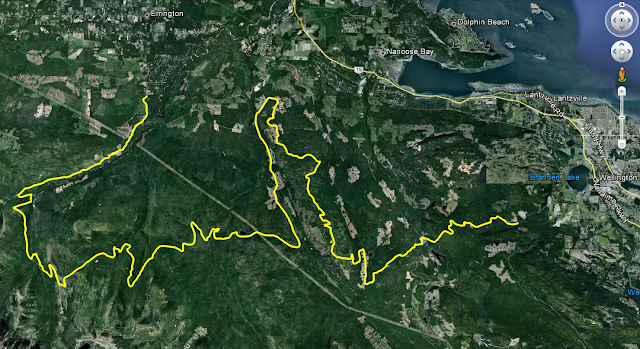 We ran into difficulty right off the bat:  What looked like an old logging road heading SW up Okay Mountain turned out to be a creek bed that joins with a more obvious old logging road further up the mountain.  Our plan changed to one of pure exploration:  Is there a road or trail that will take you up or around the mountain from that side?  We began riding any spur trail we could find.  In the end, we nearly did it.  We almost got through to clear trails on the other side of the mountain, except for 150m of non-rideable walking trails!

Here's the actual route we ended up taking: 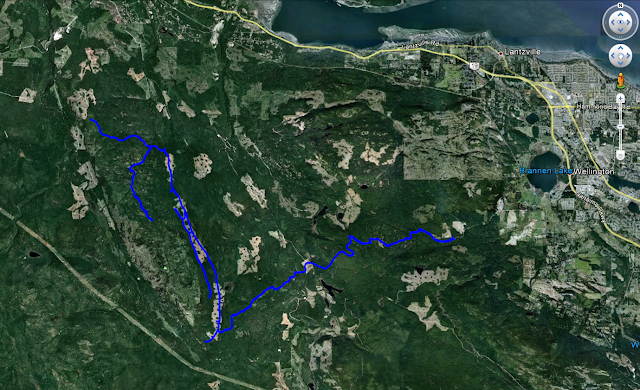 Some of these roads were increadibly grown-in and we spent quite a bit of time stopping to remove fallen trees and clearing debris.  Great fun, but HOT as hell! 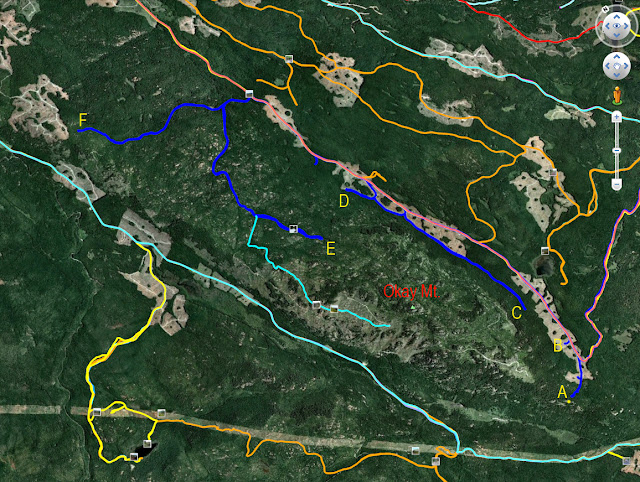 Location "B" was a short dead-end spur.  At this point we were exploring anything that made its way towards the mountain.

We decided to give the usual road that leads to the top another try.  I got stopped by snow going up here last winter and Paul had stopped some distance beyond by a large rocky area.  Sebastian and I made it past the snow location, but the steeper rocky section beyond had us turning around pretty soon after, (at location "E").   We had hoped to come down this section today, but clearly there's no way up there from the other side.

So, that was it!  It wasn't what we had intended, but it turned out to be a pile of fun all the same.  We saw an interesting sight on our way back to Doumont Rd:  There are two backhoes now parked between the tank traps intersection and Boomerang Lake.  You have to wonder if they're gearing up to do some serious road blocking by digging more channels as they did right at the Weigles Rd. entrance a few weeks ago.  Hope not!  There has been a lot of dumping in the area lately!  :(

Great ride... thanks Sebastian.
Posted by Unknown at 7:50 pm