Leaving Lake McDonald Lodge early, we whisked through the rest of the park and headed south on the #206 deliberately missing Whitefish and the traffic.  We linked up with the #93 and followed the west shore of the beautiful Flathead Lake.  The morning mission was to find breaky after about an hours ride and top off the tank.  We passed amazing views, quaint lakeside towns, and great breakfasty looking cafes.  Unfortunately, I had a bug up my arse, and decided to continue and get some miles under our tank, waiting for the perfect place, at the perfect time, that my perfect imagination had conjured up.  Unfortunately, reality was somewhat different.  And the further south along the lake we chugged, the more isolated, dry and flat the land became.  Eventually, I pulled into what I thought would be our last hope of breaky before turning West on the #28, which I knew to be a desolate stretch of highway from previous reading.  My wife tapped me on the back and told me we were on a reserve, and that the locals were looking agitated... 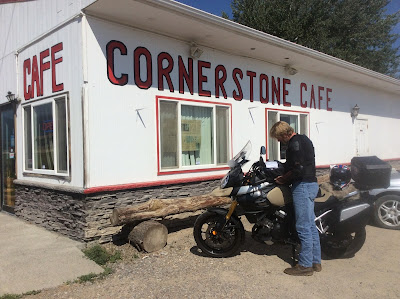 After turning right before Elmo, we hit the #28 which was gorgeous, but desolate.  But the scenery, rolling prairie turning to golden semi-desert, was no substitute for breakfast, so no pictures were taken.  Besides at 120kmh, I was concentrating on the jack-rabbits and gofers who had decided to wake up in fancy-dress as chickens.  We passed - I kid you not - another place called Lonepine...it was desolate, and there was a pine tree, once, I guess.  Soo, after 30 minutes of not seeing another vehicle, we finally stumbled upon the above, Cornerstone Cafe, in Hotsprings, MT. Although we couldn't see any hot-springs, we do seem to get lucky with our breakfasting places, and this was no exception.  There were two locals and a really friendly waitress.  The locals got chatting to us about Canada, and asked if there were "any Chinamen up there?"  Not sure how to answer, we discussed our heritage and when it became evident we shared some commonality (heritage that is, not politically incorrect generalisations, mind) they wooed us with their health problems.  They quizzed Iris on her medical knowledge, what their blood test and EKG results meant, and we had two instant friends. The food was fabulous.  A mixed medley of cubed steak, chopped peppers, hash and eggs with toast and, wait for it, marmalade went down a treat.  And cheap!  You can see where my interest lay.  Not only that was a gas station next door with 94, which, coincidentally, was about the temperature at 10am.

Shortly after leaving Hotsprings, the scenery started to change back to dry pine forest and hills.  It was very picturesque, although it was evident there had been a fire here in the not too distant past. The road began to wind up and over the hills, following what must have been the path of least resistance when wagon trains came through here.  This made for epic riding which was to continue until Bonners Ferry.  Joining the #200, heading northwest towards Thompson Falls, the scenery continues to green up and is considered a scenic by-way, throwing vistas and corners together as one.

Arriving in Thompson Falls, there were no signs of falls, but I did find a spray wash to blast the bugs off and we sat overlooking the Clark Fork River.  This, like nearly all the rivers in the northwestern states, is heavily dammed.  There was a weir here, and while picnicking in the shade, guzzling fluids we bumped into two women who chatted about Canada, Canadian Husbands and politics.  Trump came up.  These two gentle, polite and warm-hearted women were going to vote for him, because, "Hillary is a liar."  What do you say?

By the time we reached Noxon, just prior to turning off onto the much awaited #56 and heading north, it was scorching.  Over 100F we pulled into a deserted lay-by - the Americans do such a good job of these - and took a rest. 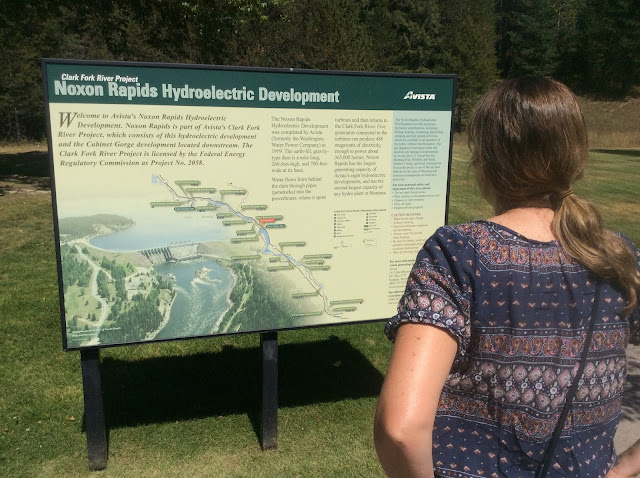 Turning right onto the #56 from just after Noxon and riding to Troy was amazing.  It was another...yes another... perfectly tarmacked, very lightly travelled (as in 2 cars and a truck) perfect ribbon of windy tarmack.  Elevation, curves and scenery.  Wildlife too.  We had be warned about moose (much of the north eastern side of the highway in spots was perfect marsh woods for them), but not about mountain goats. 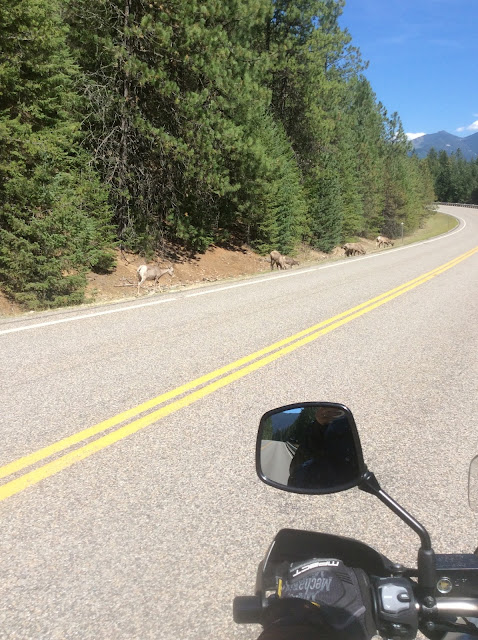 We didn't stop in troy, but it looked like a nice place.  More beauty...what to do!  Bonner's Ferry was much lauded as a final destination for us, but, luckily we had booked into the Edgewater BW hotel in Sandpoint.  Bonner's Ferry had some quaint shops, and nice downtown, but I'm glad we had chosen to press on for another half hour and reach Sandpoint, that is, until we got lost in Sandpoint's maze of dead end, one way, no left turn sides streets.  With a small scale map and no GPS, we had to resort to - I know, I know, asking for directions.  Of course, he'd never heard of it, he spent to much time trying to get surreptitious looks at my wife's derriere.

Ahh, but Sandpoint was worth it.  It's a great town - very picturesque and full of great eateries.  We got the hotel, decamped, and went for a swim.  Later I completed the onerous task of oiling the chain - the sum total maintenance needed on the trip (read it and weep, you Harley riders). 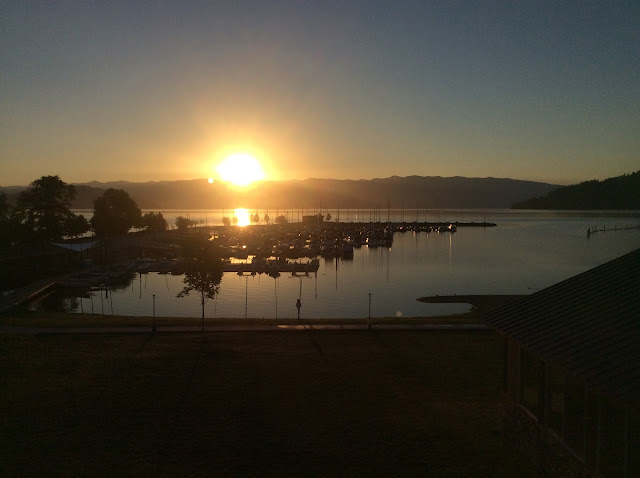 Food that night was excellent and a short walk away at Arlos Ristaurante... It gets mixed reviews on Trip Adviser, but all I can say is it was excellent while we were there.  Great food, great service, very reasonable, great views from the deck of the passing boat traffic, and a honking big black spider which dangled down over the next table from the parasol and frightened the annoying vegetarian away.   Can't say better than that.

Stumbled across this page and want to read more...?
Posted by Paul at 11:14 am