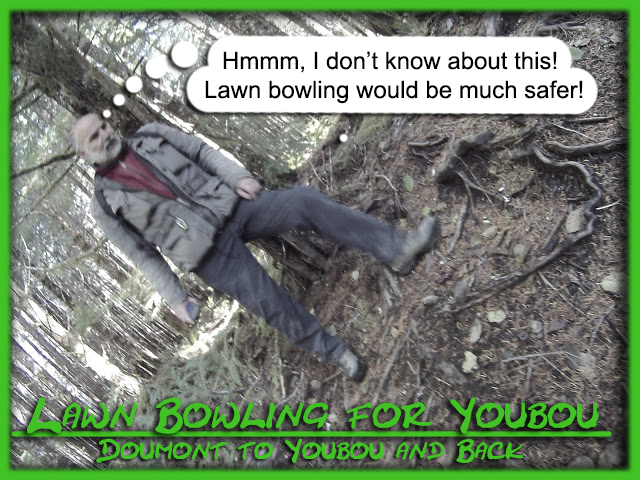 Finally, a blog entry!  Our readership of six is probably down to three or four at this rate!  Anyhow, it has been a long time since I made a blog entry due to a broken collar bone and long lasting back problems, but we're back with a vengeance to tell you about our recent 250km "Figure 8" ride from Doumont Rd to Youbou and back.


Here's the overview map of this ride: 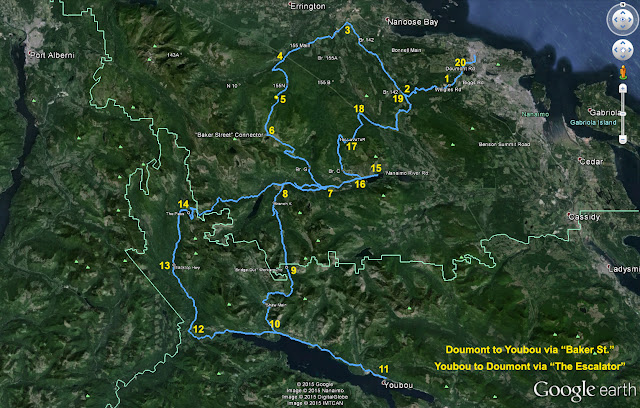 Paul has had this ride idea hatched for a few years now.  He went out riding with Ryan, another riding partner of ours, some years back when they were kiboshed by an ugly "bridge out" section along one route to Youbou.  Paul was on his larger 650 at the time and they decided to avoid a rooty uphill work-around and went off in search of an alternative route which was never found.  The thought of this unfinished route to Youbou festered in the back of his tiny mind and created the twisted riding partner I know today!  But now, likely under the advice of his psychoanalyst, we attempted the route once again in order to cure his rapidly declining mental health.

We started out at our common Doumont Rd. starting place and made our way through the tank traps to Branch 42 where we headed NW to 155 Main.  A left turn onto 155N had us heading directly to a water bomber crash site commonly referred to as the "water bomber near Mt. Moriarty."  (49°10'60.00"N   124°22'60.00"W)  We found the site:  All that remains are a few snapped off large trunks of trees and a circle of trees marked in blue loggers' code to keep them untouched.  No wreckage was visible at all and it can only be assumed that the site was cleaned up when a nearby, (now disused), logging road was installed in the area.


Onward we plodded to a section of trail which leads to the Moriarty Lake region, aptly named "Baker Steet."  This is a fun section of trail with a few good challenges to keep any rider awake and on their toes.  No wipe-outs through here this time around, but we both managed to get caught up for a minute or two in one particular muddy section.

We continued along branch G. and after taking a wrong left turn, (which you might want to look out for if you use our track), we corrected the route and connected with Nanaimo River Road and a left turn onto Branch K.  This road takes you to the dastardly "bridge-out" location.

Paul was cleverly silent about the nature of this "bridge-out" and its work-around.  I was aware that a work-around existed, but was never really filled in as to how gnarly this section really is.  For some, I'm sure it's a simple matter of twisting wrists with careful clutching in order to gracefully dance their way up the 25° gradient.  I'm not the most competent of riders to begin with, but my newly repaired collar bone had me thinking twice about going up through this patch at all.  Paul convinced me that a good push behind my underpowered Kawi would be all that was needed to get through and he was right, although I dare say I wouldn't have tried this chunk of trail had I been alone.  Poor bastard had to push like hell! :)  We both agreed that going down this rooty slope would be moderately easy.


We were faced with a couple of small river crossings after this, one of which was quite boggy with plenty of nasty quadders logs.  Thanks guys, you had me off my bike after glancing off of one of your poxy wood chunks!  I had my left hand nicely trapped under my bars long enough for Paul to snap a pleasing "buddy down" shot.  Go ahead and post that sucker Paul!  You know you wanna!! (Oh, I have, Lemming Boy - it's on the vid!)

From here we continued along the Shaw Main towards North Shore Rd., which took us directly into Youbou.  Halfway along the north shore of the lake, a massive Roosevelt Elk bull crossed right in front of us, herding his 4 largish cows across the road.  It was a close one! (Shots on the vid). We gassed up at a Youbou gas station, (which sells regular, but only marked premium gas), and went on to Cassy's Coffee Shop which is a newly opened venue selling small meals and good coffee.  Drop in there if you're in the area, they are very friendly and the food is good.  Paul is convinced his heated jacket kept him warm on the return trip, but I know it was Cassy's chili working its magic.


After devouring Cassy's tasty nosh, we took off traveling west towards Nitinat River Rd. where a right turn leads you north up the "black top highway" which eventually takes you to Fourth Lake.

The pass leading up to Fourth Lake is superb fun!  We both remembered this road being pretty chunky with quite a few boulders at one time.  It's pretty smooth now and we charged up this excellent steep road at a good pace.  The twisty road and higher side mountains really add to the  overall beauty of this pass.  From here we blasted down Nanaimo River Road hoping to catch the gate open.  It was locked!  I think we both knew it would be, but it was worth a try anyway.

It turns out that the locked gate was a real boon!  We decided to return west along Nanaimo River Road and head up Branch C to the familiar "HeLLeVaToR" connector trail that joins our more local logging roads with the Mount DeCosmos area.  We reached the Hellevator and searched briefly for a trail we have heard about that runs parallel to this trail but is much easier and faster to ride.  After deciding it might not even really exist at all we started down the usual route only to find the elusive connector trail directly ahead of us.  (A big thank you to "The Highway Men" who opened this new connecting trail up.  It's fantastic).  In "REAL Motorcycle Diaries" style it was quickly named "The Escalator" and down we went towards the main floor and ladies undergarments.

After our float down the pillowy-soft escalator ride provided to us by The Highway Men, we followed our standard route out, taking a right-hand turn down through the power lines, zipped past Boomerang Lake and finally through the Tank Traps.  Our final destination, oddly enough, was the Black Bear Pub where we once again administered muscle relaxing fluids (orally of course).


For a downloadable track of this ride click here to visit us at Wikilocs!