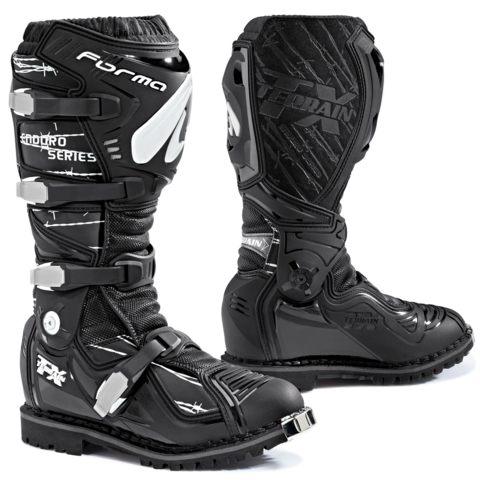 Just a quick entry to say, after initially being underwhelmed by these boots,  I'm liking the Formas more and more now.  After several walks on rocky terrain (thanks, James), and some insoles (my feet are long but not wide), lowered pegs on the bike, these boots are working well.

I have been on two slow speed (very) single-track rooty technical rides with the TX Enduros and begun to get quite used to them. After initially disliking the clunky over protected feel, they are now conforming to my feet, becoming more flexible and giving me the feedback I need to change gear and brake more accurately.  I had one off yesterday on black top, and had it not been for the boots and the excellent MSR knee guards, I would be in a cast with a likely fractured patella and twisted ankle.  Admittedly it was a slow speed on-the-pegs lock to lock figure eight practice with no real speed involved, but my right knee and boot were the first to impact the road and become sandwiched by the bike.  I'm wincing to think about what that would have been like if I had been wearing sweat pants and my hush puppies...

The boots are very comfortable now, the adjusters are extremely well thought out, super easy to use and make for very quick fitting and removal.  No word on waterproof"ness" yet, but the soles are grippy and the buckles don't snag on leaves or debris.  Needless to say, with the solid hiking boot sole, the steel toe, rear impact guards and hinge, I feel well protected.

The only downside is that because I wanted the enduro sole for hiking to those inaccessible fishing holes, the grips make it hard to slide the boot on the ground, and require a deliberate thought to lift the boot from the pegs rather than slide them off.  But frankly that's like buying a Porsche and complaining about the lack of room...Not that I'll ever be in that position.  I'm sure I'll get used to that too, over time.

Being my first bike boot ever, I don't feel I can give them a rating so far, but I will say they are growing on me in leaps and bounda and are well worth the money, especially when compared to similarly equipped - but far more expensive - boots from other well known companies like Gaerne, Sidi and the like.
Posted by Paul at 1:23 pm