They're Not Roman Candles...

Man, that was an interesting ride!  I just went out for a quick ride to see if I could access the local logging roads using the Vipond Rd. entrance.  I was hoping to find an alternative route to the standard "tank traps" entrance which has become boggy and more difficult to get through these days.  I didn't find one up Vipond Rd. way.  The road terminates in a Y; the left gated entrance looks very private and well-groomed (not an option), and the right is an extremely well-blocked logging road gate.  I decided to ride up the boggy trail to the tank traps with a mind to turn around if the rain should start up.  Rain be damned... it hailed, and the wind picked up to the point that it was clearly time to return home.  This is where the ride got really interesting.

I returned along Biggs Rd through an instant and quite nasty wind storm that had just started up.  I could see smoke directly ahead of me and a mixture of redish and green colours rising off the road.  "Bloody kids," I thought, "they're lighting roman candles on the road ahead."  (We're still finding the remnants of Halloween fireworks around our house even though Halloween is supposedly done).  As I rode closer I discovered it was in fact a very large tree that had just come down seconds before.  It had crossed and completely blocked the road, bringing several substantial power lines down with it.  A large fire started up around the coloured flashes and a distinct electrical fire smell filled the air.  My first thought was "Ooooh, that will look good on my blog," but I considered the insulative properties of my tires and I wondered if my shoes shared the same poor conductive properties on the wet road.  I turned the bike around and viewed the fire from a safer distance, putting my feet on the ground this time.  I didn't take a photo.  :(  It was a much safer idea to just get the hell out of there and report it). 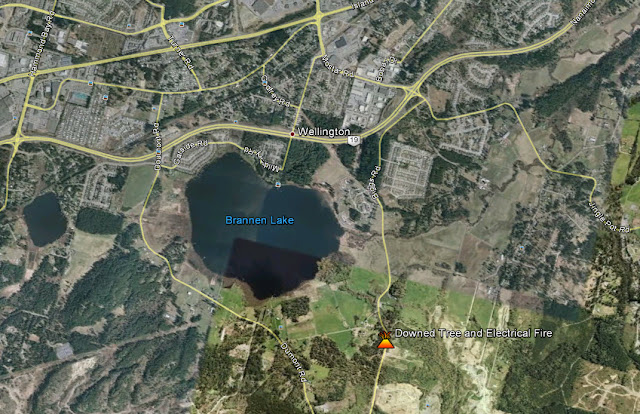 I passed a fire truck closer to home.  They had blocked Mostar Road to clean off branch debris that had landed in the area.  I stopped and reported the fire and downed lines to them.  Finally got home to a power outage.  Vicki told me the instant wind storm had hit at home too.  Power just came back on a few minutes ago.  Bike's still out... Better go put it away now that I can open the garage door.
Posted by Unknown at 3:40 pm