Some time ago we visited the crash site of the "Marianas Mars" CF-LYJ water bomber near Moriarty Mountain on Vancouver Island.  The "Marianas Mars" was one of four water bombers in service in the Vancouver Island region, each charged with putting out forest fires for Macmillan Bloedel.  We had looked briefly at the site during a ride to Youbou in 2015, but time was short on this earlier ride and we left the site quickly without really giving it the time it deserved.  Click here for details of that ride.

More recently, Dan F., one of our readers, fellow rider and associate of the local Nanaimo Historical Society, contacted us and invited us to a presentation by a past Mac Blo Administrator who has first hand knowledge of the crash and who was present during the extraction of wreckage during the aftermath of this tragedy.

His presentation was excellent.  He included historical details of the four Mars bombers, and covered details of two major fires in our local area, one being the large fire on Mt. Moriarty where the Marianas came down.  The plane had been in military service until 1956 and was eventually sold in 1959 and converted into a forest fire fighting aircraft (CF-LYJ) by Macmillan Bloedel.  The plane crashed on June 23rd, 1961.  It's believed that the water drop mechanism failed and the aircraft was unable to achieve the altitude necessary to clear the mountain.  All four crew members on board perished.  (Wikipedia reference).

This was a perfect ride to open the season and a great reason to begin posting blog entries once again. Paul and I decided to revisit the site and spend a little more time looking around.  Let's get a look at the track for this ride.  Here's an overview using Google Earth to fly over the route: (After you hit play, you'll see this better at full screen settings.  Takes a few seconds for the view to settle down).


Here's the track viewed with Garmin Navigator (at 1000x speed): 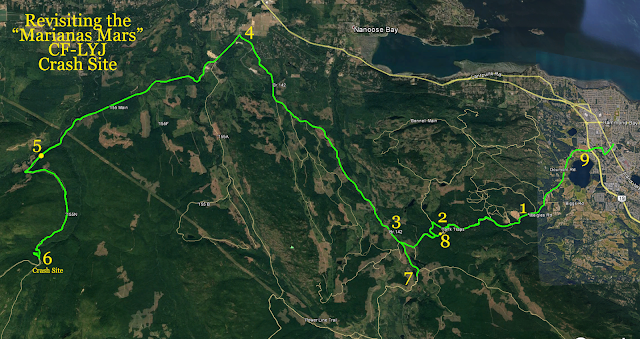 1.  We entered the logging roads from our usual Doumont/Biggs Rd. side.  Neither of us have been through here for a while since Timberlands began their most recent war against riders entering the region.  We were pretty interested in seeing how impregnable the "tank traps" area is to date.

2.  Whaddaya know, you can get through!  That's right, it needs patching up again guys!  Get your finger out!  ;)  Quadders and bikers have bridged the newly dug traps and a route goes through to a location very close to the old "tank traps" exit.  (I've been asked in the past not to reveal news of entrances into the area, but quite honestly there's no secret here.  We're all using these common routes and the logging company is well aware when these major routes become compromised again.  In fact, they must expect it to happen pretty much on schedule.  It's nothing new:  They patch it...  We get through... They patch it...  etc).

5.  Turned left onto 155N.  This logging road entrance was recently gated.  Access is possible by bike and likely by quad, although it's tight.  You won't get a truck in there. 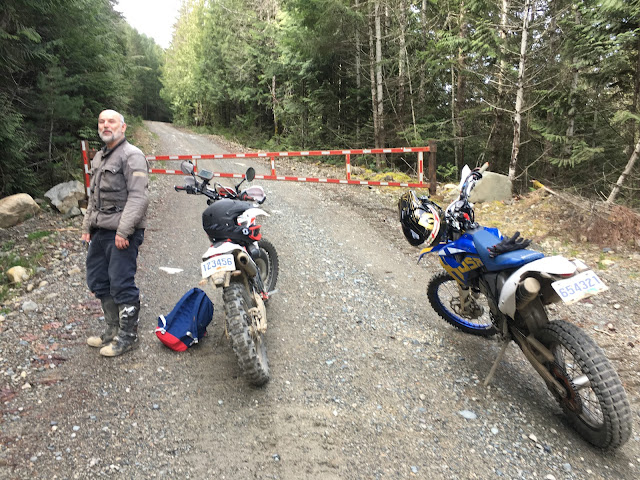 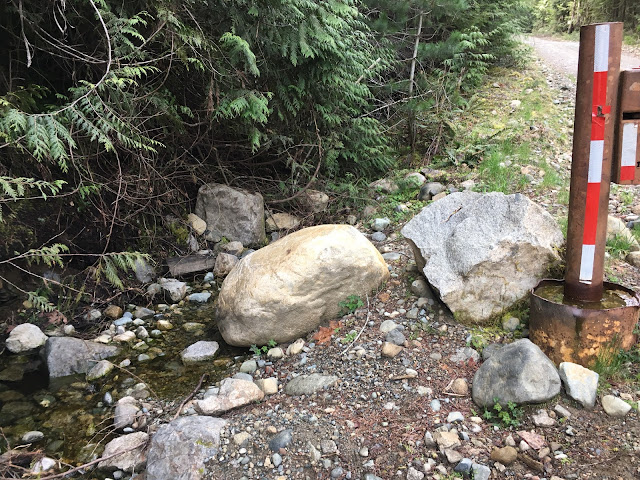 There are some pretty good views of the Strait of Georgia looking N.E. from high points of the road on 155N as it curves its way up towards the crash site.

We hit snow as we got a little higher towards the crash site.  We were able to ride through it and managed to get right up next to the coordinates. 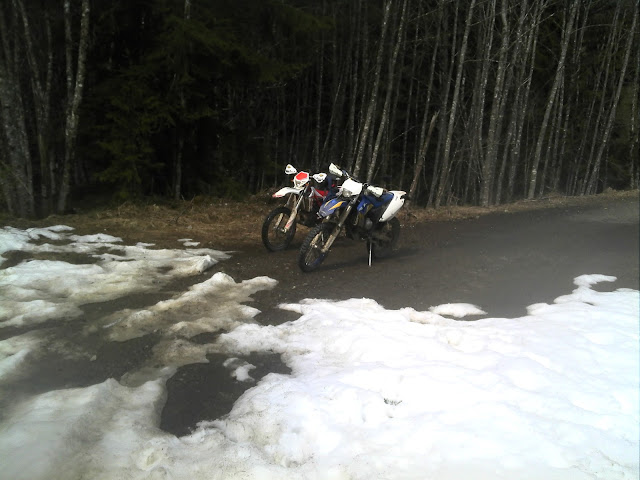 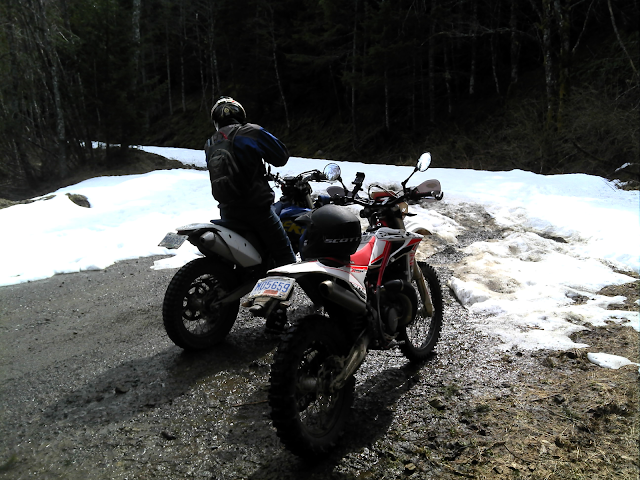 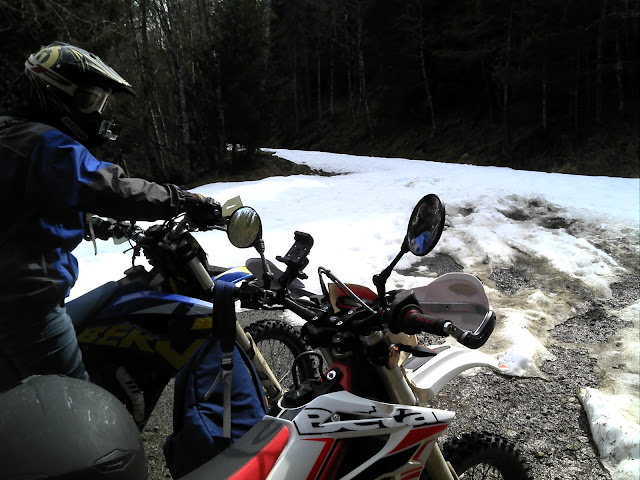 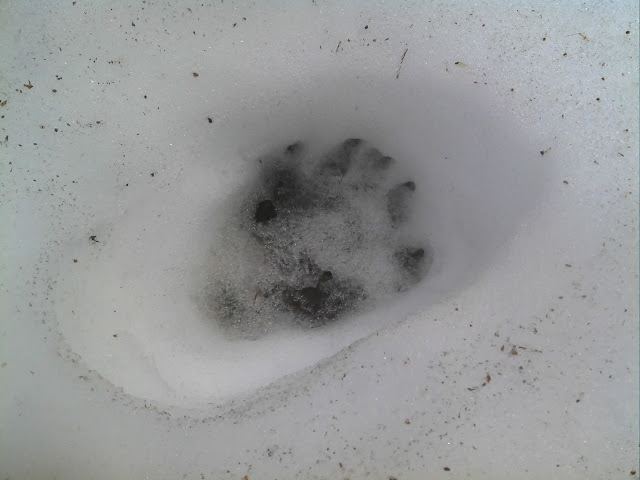 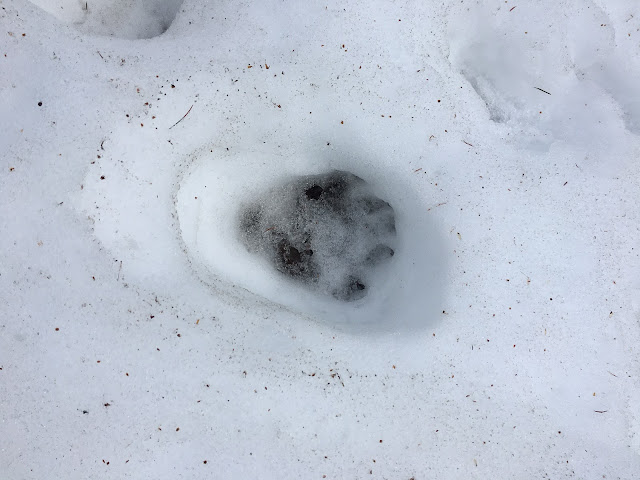 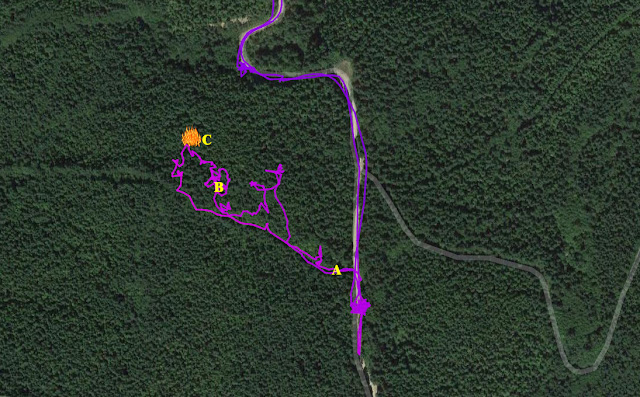 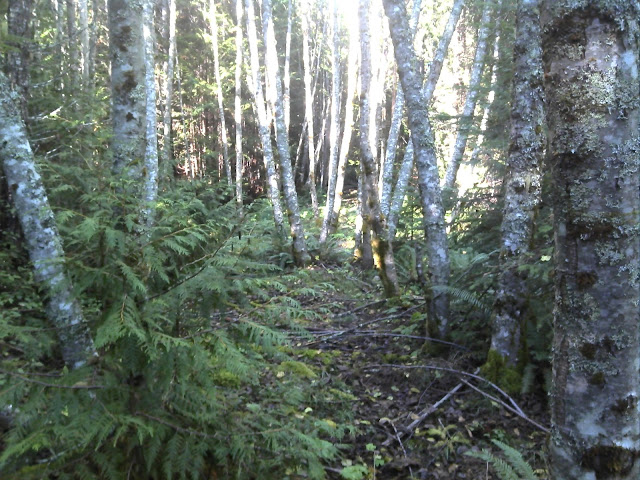 You continue along this old remnant of a road for a couple of hundred yards and then enter the trees on the right side (B).  Look for trees marked in blue paint. 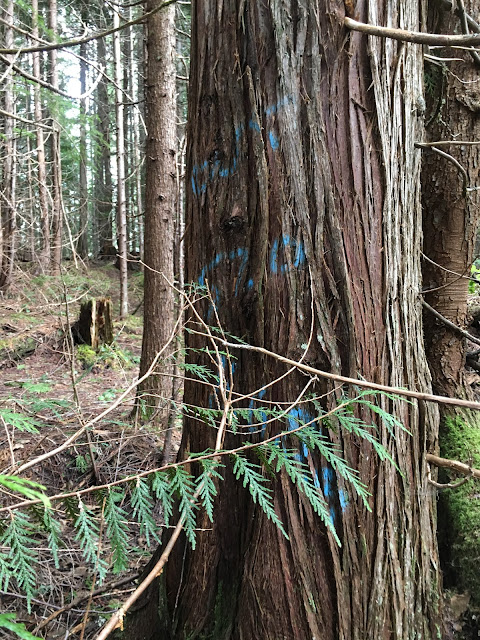 Most are numbered and some appear to have the word  "OUT" painted above a number.  We were speculating on whether this number referred to a piece of wreckage or perhaps even human remains.  Numbers appear to reach into the twenties.  There are quite a few blue markers sprayed near the coords given above, although they continue as you proceed towards the N.W. 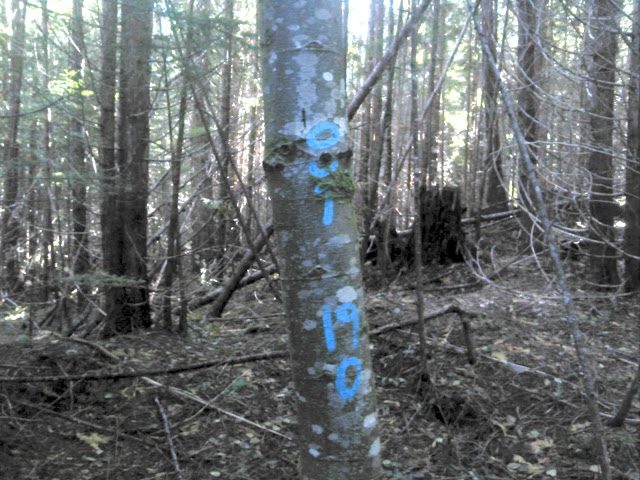 We stumbled upon an empty bear den half way along our short hike.  Not the sort of thing you want to get too close to during the spring, but it appeared to be safely abandoned some time ago. 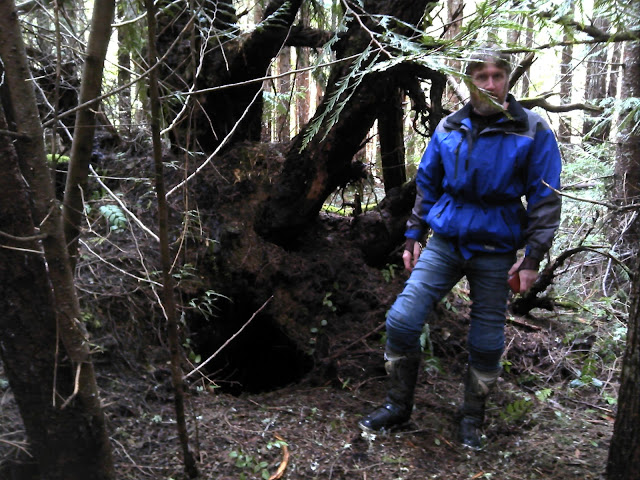 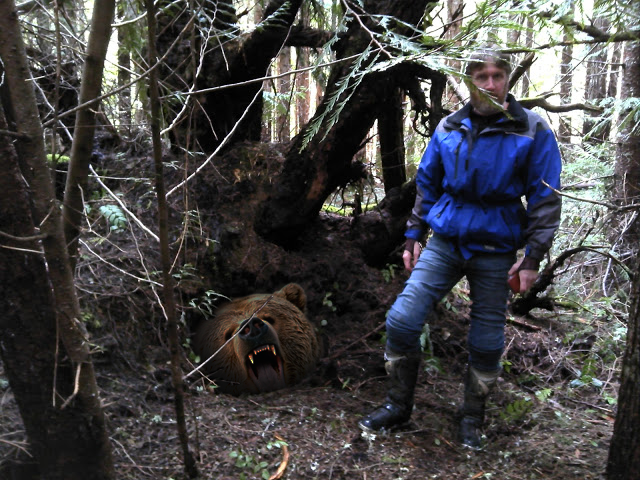 Eventually you reach a steep downward slope where there is old fire damage visible in the remaining stumps and roots.  Pretty clear evidence of a fiery crash site is visible here (C).  We both looked carefully for any sign of wreckage all through the track shown above, but found no metal at all.  We looked in a few areas which appeared to be compressed from impact using a metal detecting probe, but found nothing metallic at all. 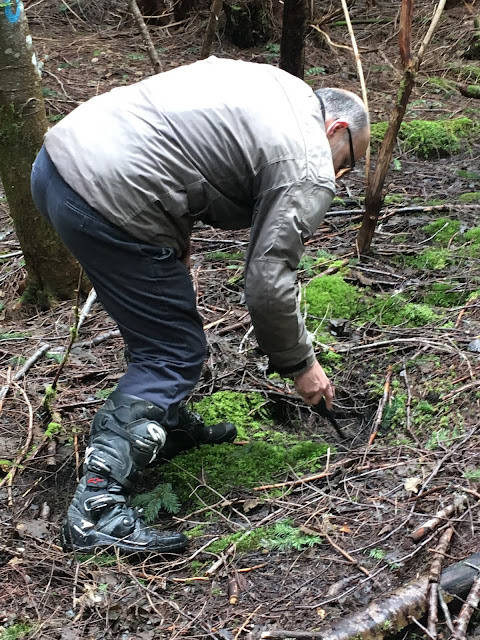 At location C we separated and Paul traveled down the slope in the hope of finding fragments that might have made it to the bottom, (at the fire site).  Great idea, but unfortunately he didn't find anything there either.  Kudos to the MacBlo cleanup crew!  You guys removed every trace!  It's a heavily treed area and it very likely gets deep annual coverage of needles, covering any small traces they might have been left.  It's an interesting site to investigate nontheless; if you look carefully, the direction of travel can be seen by following broken stumps and old fractured and fallen trees from the fire location towards the blue marked trees at the coordinates.


7.  We retraced our route and continued on towards Cottle Lake to see if the route was still blocked by gate.  The gate was locked. 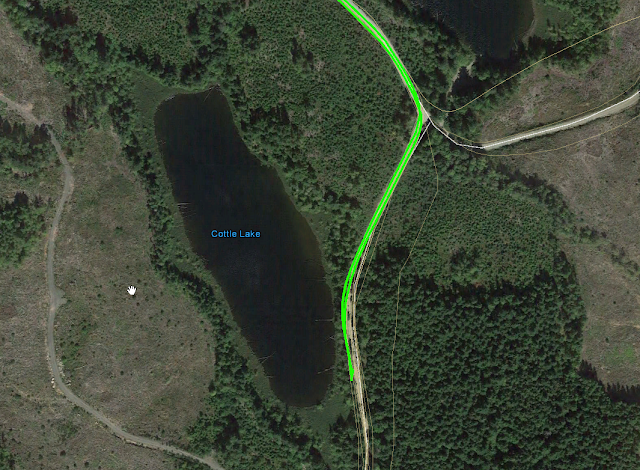 8.  We looked at alternative ways of getting back through the tank traps, but had no luck.  The route we followed, which we have referred to earlier as the "tank traps alternative route," ended at a dead end with no clearly visible path through.  We then returned the same way we had entered the area. 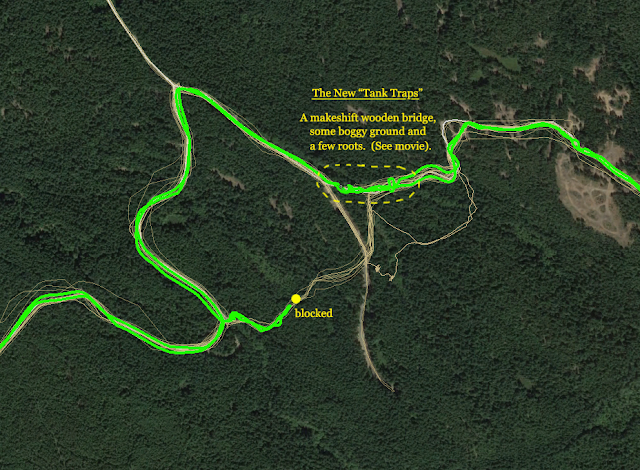 9.  ESB poured like rain at the Black Bear Pub!

Here's a quick look at the elevations on this route: 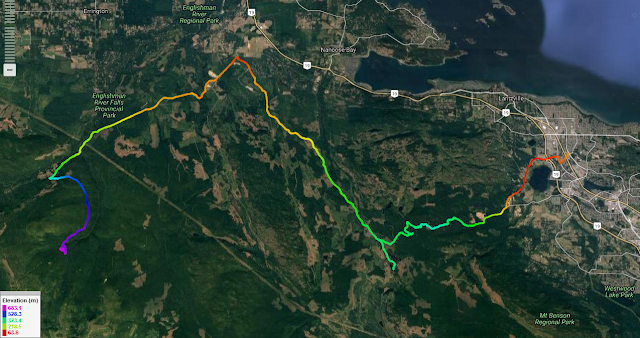 You can get a better look if you click on these pics.

The movie feature.  Go get some popcorn:


Excellent ride!  Big thanks to Dan for inviting us out to hear that presentation.


Track for this ride is available here, at wikiloc.com


YouTuber "Cars show Island" send us a link to the YouTube video "Marianas Mars The Dean Fire 1960 British Columbia" which shows excellent footage of the Marianas Mars in action over the Nicola Valley.  He tells me it's the only known footage of this Mars water bomber.

Go give him a "like" if you get a minute:

As a side note, the Aviation Safety Network website list this crash location with a lower level of accuracy.  (Possibly they desired it to be this way, but more likely they just found Moriarty Mountain on a map and pinned it).  Their listed location is 7km out, so don't go there!  ;) 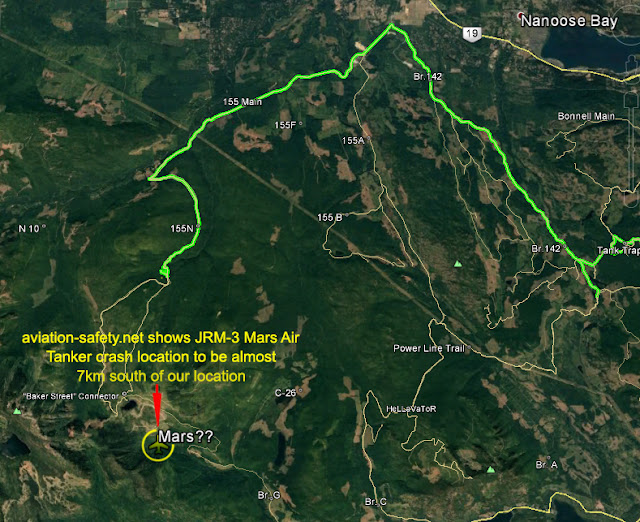 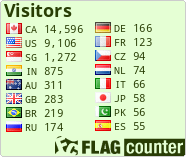